Lewisville ISD parents continue to opt out of vaccine requirements 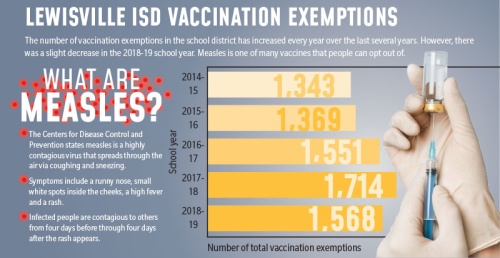 A growing number of parents in Lewisville ISD have filed for vaccine exemptions for their children since 2003, when state lawmakers made it legal to opt out for reasons of conscience. Previously, only medical or religious reasons were allowed.

The number of unvaccinated people has been growing not only locally but also across the nation. This year, the United States has experienced the largest measles outbreak since health care officials declared the disease eliminated in 2000, according to the Centers for Disease Control and Prevention.

“The public should be informed that these diseases are out there, and they exist,” he said. “Whooping cough is something that does happen, measles as well and mumps—all of these are coming back.”

LISD Director of Health Services Melanie Vincelette said exemptions can be filed for a single vaccine or multiple.

“There are many reasons a parent files,” she said. “Sometimes it’s just to delay getting a shot until they can find a provider. Or they want to avoid multiple shots at one time, and the child eventually gets all of the vaccinations, just not on the required timeline.”

“Exemption rates are complicated and fluid,” Vincelette said. “There are various coverage rates per vaccine that the CDC considers ‘good’ coverage; 95% coverage rate for measles is considered good. LISD schools have a history of maintaining a general coverage rate of 95% and higher.”

But the concern for health officials is that the increasing number of unvaccinated people could eventually undermine what researchers call herd immunity. A population’s high vaccination rate helps slow the spread of vaccine-preventable diseases, protecting the unvaccinated and people for whom vaccines are not fully effective.

Local resident Mary Barnes said vaccinations should not be forced on parents.

Barnes said her sons were fully vaccinated until ages 10 and 12. But after she had a negative reaction to a vaccination, she decided to stop further vaccines for them.

“People with specific genes are far more likely to have negative reactions to the vaccinations,” she said.

Chris Van Deusen, the director of media relations for the Texas Department of State Health Services, said there is always a risk of side effects with vaccinations. But he suggests vaccinations to protect those who can’t because of health issues or age.

“If everybody else is immunized, then [outbreaks are] going to be minimal,” he said. “But I also don’t want people to think that immunization is 100% [effective]. It never is. Again, as with any medication, people’s bodies respond differently. Even after immunization, you see people get sick, just because their immune systems didn’t respond, or didn’t respond sufficiently.”

At least one bill—Senate Bill 329—that did not pass in the Texas Legislature this session would have given parents the right to be informed about how many students at their child’s school are not vaccinated.

The bill would not identify the unvaccinated students or reveal any personal information. Also, the identity of the parent who requested the information would be protected.

“[Exemptions are] one of those areas of concern to a parent, and it’s information that already exists, so let’s give them all the information they can have,” said state Sen. Kel Seliger, R-Amarillo, who authored the bill.

“[It’s] along the same lines of wanting to know how close a school is to infrastructure or what security is in place at a school.”

Emily Davis and Olivia Lueckemeyer contributed to this story.