Public spaces, such as plazas, outdoor spaces and trails, are included in the proposed development. (Rendering courtesy city of Lewisville)

A zoning change will clear the way for Fronterra, a proposed mixed-use development that includes 201 townhomes, 773 multifamily units and 40,000 square feet of ground floor commercial space in Lewisville.

The Lewisville City Council unanimously approved an ordinance granting the zone change at its April 19 meeting. The 35.77-acre tract of land will move from light industrial to planned development — mixed use district.

“The proposed development before you tonight is consistent with multiple plans: the Northern Gateway Plan, the Lewisville 2025 Vision Plan, the Corridor Redevelopment Plan,” Lewisville Planning Director Richard Luedke said. “It’s harmonious with the surrounding neighborhoods compared to the current light industrial zoning that is now in place.”

The proposed Fronterra development is part of a wedge-shaped swath of the Northern Gateway Plan that is bounded by McGee Lane to the west, I-35E to the east and FM 407 to the south.

The proposal includes three subdistricts: townhomes, urban living and commercial core. Trails would connect open spaces within the property to surrounding neighborhoods, and a large water feature would serve as a landmark in the urban core district.
RELATED STORIES

“Overall, I love this project,” Council Member R. Neil Ferguson said. “Part of it is simply because it’s been a long road to get to this point from light industrial. It’s everything we want on the site.”

“It comes from a history of seeing projects where we don’t sometimes stop to think about Thanksgiving or Christmas at every third or fourth house,” he said.

The zoning ordinance included five alternative standards to the IH-35E Overlay Core Subdistrict. The alternatives reduced the amount of required stone or brick for certain buildings and reduced the landscape buffer along I-35E from 15 feet instead of the required 20 feet. 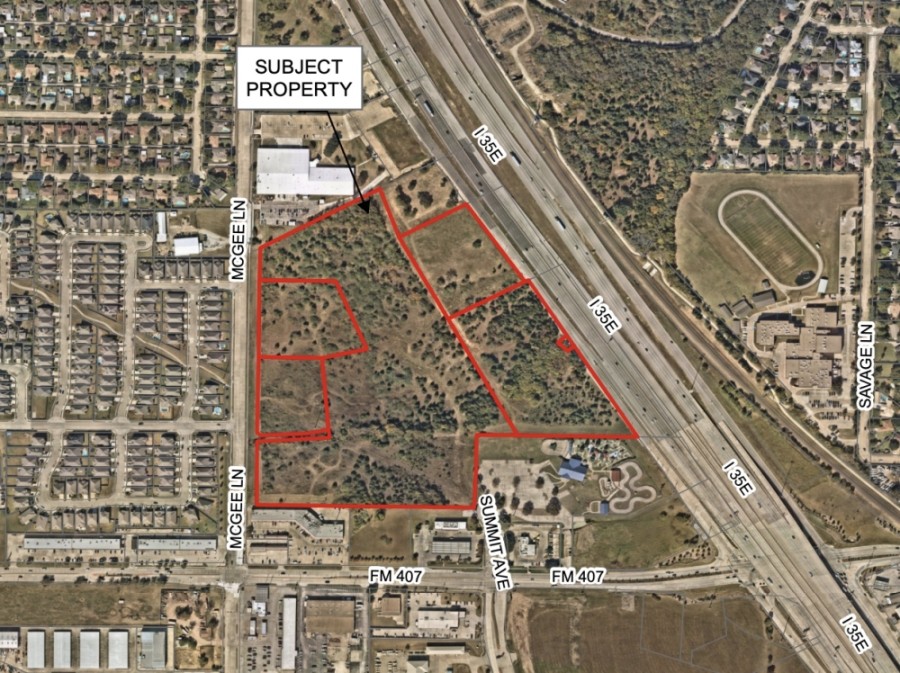