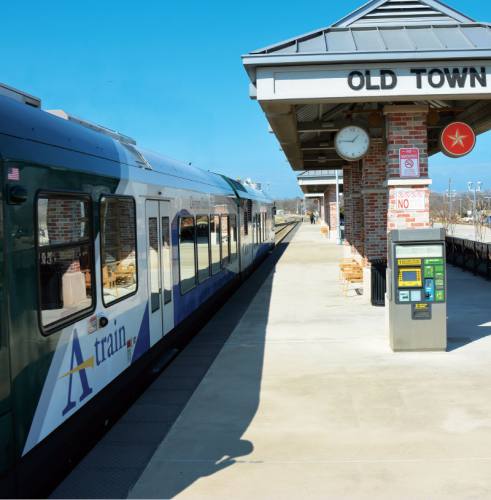 Seven years after its inception, the Denton County Transportation Authority’s A-train has proven it has a multitude of economic benefits to its member cities—Lewisville, Highland Village and Denton, according to case study results by consulting firm The Antero Group.

The A-train, which is funded from a one-half percent sales tax from its member cities, is a 21-mile rail system connecting Denton to Lewisville. DCTA has five stations—three in Lewisville and two in Denton.

The results revealed the A-train is good for business, having attracted new professionals, spurred millions in new market investment, increased quality of life and provided a competitive advantage for its member cities to attract new businesses.

“There is no denying that public transit is a good thing to have,” Lewisville Economic Development Director Nika Reinecke said. “It definitely has an impact on economic development. There’s no denying that.”

DCTA President Jim Cline said the study was done to analyze the true extent of what the train brings to the region.

“DCTA saw a need to emphasize the wide range of benefits our system brings to the communities we serve,” he said. “Beyond providing an affordable, reliable and complementary alternative to car-oriented transportation, we wanted to be able to show that investment in transit also results in comprehensive financial benefits to our client communities and host region.”

Antero Group Principal Eric Neagu said since 2011 areas within a half-mile radius of a train station have seen a combined total of $1.3 billion in increased property value.

“When you compare that amount to the $347 million it cost to construct the A-train, that’s a significant return on investment,” he said.

One of the biggest and most successful transit-oriented developments along the A-train route is the Huffines multifamily development, Hebron 121, at the Hebron Station, Neagu said.

“This project has had tremendous success,” Neagu said. “The first phases are 95 percent leased and another phase is on the way.”

The case study notes almost $2 million in property and sales tax has been created from that development alone.

“I think it has opened doors for Lewisville,” she said. “We are able to go after larger corporate businesses. For example, the Amazon proposal for its second headquarters—we could not have even submitted a proposal on that without having mass transit.”

Amazon made mass-transit access one of its six core requirements for its future second headquarters location.

Reinecke said the train has also helped the city secure businesses in the past such as Mary Kay.

Although Highland Village does not have a station in its city boundaries, City Manager Michael Leavitt said having a station in nearby proximity has helped attract workers with high-paying jobs to the city.

“Truly the ultimate return on our investment is going to be that commuter that wants to live in executive housing with that alternative transportation,” he said. “I’ve actually had calls from HR headhunters inquiring about Highland Village’s housing stock and the availability of transit because in their words, people from England, Europe and Asia that are moving here are used to transit. So, the train is a huge plus for us because we know they want safe and nice homes, a good education system for their kids, but they may only have one vehicle or maybe no cars.”

“So, anything that can help me turn over those homes—that can provide me with an edge—is great, and I see the A-train as providing that edge for me to that individual that is wanting to relocate and [is] experienced and knowledgeable about public transportation,” he said.

Barron said the train has helped shape how Lewisville plans to develop the land near the stations.

For example, the zoning on the property adjacent to the Old Town Station is primarily industrial; however, with the addition of a station, that is changing, she said.

“Without having the rail station there, all of that area would have continued to be industrial,” Reinecke said. “There would be no push to do a transit-oriented development, which is basically a mix of housing, offices, recreation—that live, work and play environment. The station has definitely brought in that element.”

The city is working with a developer to bring in a multifamily development containing more than 350 units near the Old Town Station.

Barron said the combination of mass transit and transit-oriented development is helping to attract young
professionals.

“When you talk to millennials there is an expectation for mass transit,” she said. “I think people make decisions on where they want to live and they select a community because it has that option—not always, but I think you see it more and more with people who are under the age of 30.”

The case study indicated that 1 in 3 new residents within a half-mile radius of the A-train is 35 or younger. Additionally, it indicated that about 50 percent of all A-train riders are under 35.

“The whole focus is on giving these [young professionals] a place where they can live, work and play around those targeted stations, and I think that drives development,” Barron said. “It is the future, and without it we would be missing a really critical contributing factor to our future development and redevelopment.”

A DECREASE IN RIDERSHIP

“We’ve consistently had over half a million boardings a year on the train,” Cline said. “We are kind of reaching a new normal now that I-35E is finished with construction. We know we want to continue increasing ridership, and that’s a big focus of our board and strategic planning meetings.”

Cline said the decline can also be attributed to the decrease in the cost of gas, a low unemployment rate and the competition of ride-sharing
companies.

Neagu said DART had similar growing pains when it first started, adding that ridership should be not be viewed as the metric that constitutes whether the A-train is successful.

“We tend to look at ridership as our return on investment, but the system is a regional asset more in line with maybe a park or a highway than it is some kind of resource,” he said. “We certainly don’t do that with highways. We don’t spend $2 billion or however many billions it was to expand [I-35] and say how many cars are getting across that? And when is our payback date?”

Neagu said the best metric of success is looking at the A-train from the increased quality of life for residents, attracting high-end employers and employees, and tax revenue impact.