It is a cloudy and unseasonably cool day in mid-April, and Lewisville Fire Department’s dive team is cruising on Lewisville Lake. A monitor at the helm indicates that the lake water is a brisk 64 degrees.

It’s not quite boat season, but in the coming months, thousands of boaters will flock to Lewisville Lake en masse from all over North Texas and beyond with their personal or rental watercraft.

At about 29,000 acres and 233 miles of shoreline, Lewisville Lake is a regional tourism draw under normal circumstances. During COVID-19, it has been even more so.

“We have definitely seen higher activity on the lake, and we believe that to be a result of COVID-19 and travel restrictions in general,” said Jason Moore, the director of economic development for Lewisville. “People were wanting to stay closer to home, and the lake is one of the biggest assets we have here.”

The lake is known as the “Urban Bass Fishing Capital of Texas” due to the variety and number of fish, according to the city. It also attracts boaters, swimmers and others to parks and camp sites along its shores.
RELATED STORIES

In fiscal year 2019-20, the Lewisville Parks and Recreation Department sold 1,499 annual passes to the 622-acre Lewisville Lake Park and Tower Bay park at $60 apiece, up from 1,227 passes the year before. The passes waive the $10 daily entry fee for boats and vehicles.

The number of visitors can vary greatly year-to-year as a result of heavy rains and droughts, which can close boat ramps and flood campgrounds. In fact, while numbers were up in 2019-20, they still don’t reach those in 2016-17, which saw nearly 19% more annual passes sold. But, Moore is confident that the trend will continue.

“I think it’s definitely going to continue into this year,” Moore said. “It remains to be seen how long this trend will last, but I think when you see an increase and you see a lot of people taking opportunities to go out to the lake, it kind of refreshes their opinion that this is a great activity. Residents say, ‘We’ve got this right here by our house, so why aren’t we using it more?’” 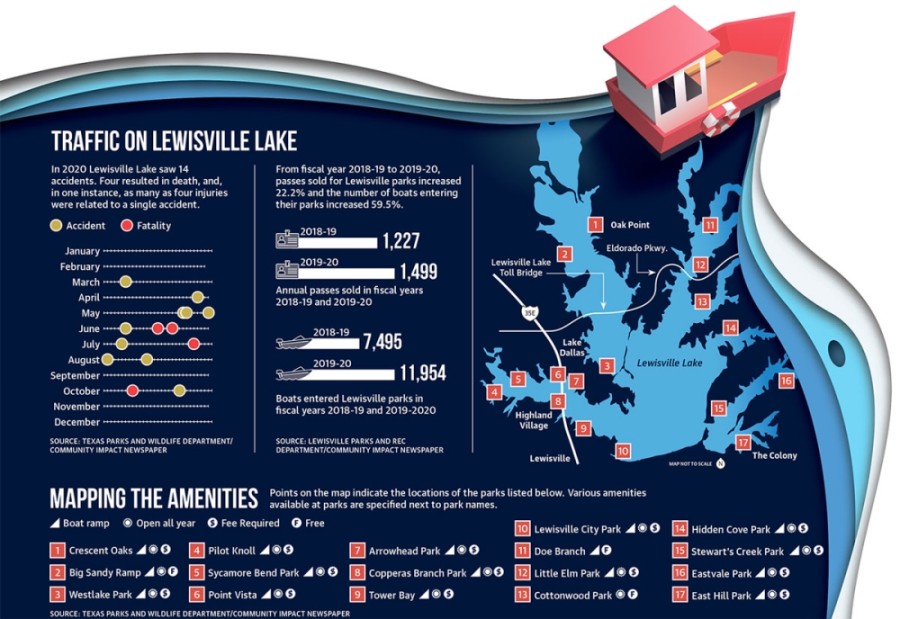 Lewisville Lake is not without risk for partygoers, swimmers, and boaters.

In dangerous situations, the fire department’s dive team is called in. For the worst-case scenarios they are armed with sonar that pierces the cloudy lake water and helps them search for the bodies of those who fall victim to the dangers of Lewisville Lake.

“Every time we come out here, it’s a different situation. It’s never the same,” Fire Capt. Jeremy Seese said. “Last year we went out on five storm events where we were pulling people off the shoreline or looking for kayakers that got caught up in it, [as well as] jon boats [smaller fishing boats] that were out there in [the storm]. ”

“In the summertime, you’re talking about potentially hundreds of boats that are all tied up together with hundreds of people that are just like that,” Seese said, referencing a large cluster of boats lashed together into one big mass. “This one is not that big. You might see 40 to 50 boats, that’s not that bad. They’re more subdued.”

A large boat comes speeding by in the opposite direction. It is carrying more than two dozen people in bathing suits. Music blares from the boat’s speakers. There is not a life jacket in sight.

“See that right there?” Seese said, pointing out the overloaded boat. “That’s a hazard for us.”

If game wardens, the law enforcement arm of the Texas Parks & Wildlife Department, were to inspect the boat and find that there was not a life jacket available for each person, the boaters might face a fine ranging from $25 to $500 a boat, he said.

“That’s the biggest thing, you know,” Seese said. “You need to have a life jacket for every person on board. We get a lot of rentals out here. People go, and they rent boats, and they don’t know anything about them.”

“The lack of safety equipment is a huge challenge,” said Kimberly Sorensen, a TPWD boating education manager. “What I’m seeing is that the general public doesn’t know the importance of wearing a life jacket, and they don’t know what the law is in terms of having a life jacket on board.”

State law requires all children under 13 years old on a boat under 26 feet long to wear a well-fitting life jacket.

“Most of the time, when I talk to people, they don’t even know that it’s a requirement,” Sorensen said. “Especially new paddlers. They went and bought a craft online, or they bought it at a retail store, didn’t talk to anybody until they walked out with a paddlecraft and a paddle.”

Although boating while intoxicated is illegal, there are no open-container laws, and drinking is permitted for passengers. Drinking while boating is dangerous and the cause of most boating fatalities, according to the TPWD.

“If you’re planning the parties out, make sure you’re responsible, make sure you have a sober captain. Things like that are helpful,” Sorensen said.

State law requires training for anyone born after Sept. 1, 1993, to operate vessels, such as personal watercraft, motorized boats over 14 feet in length and sailboats. The TPWD recommends every boater receive training.

This is more important than ever with more novice boaters on the water, Sorensen said.

“Whether it was COVID related, or whatever it is, there’s a lot of new people buying boats,” she said. “That’s everything from human-powered or paddle craft, all the way up to heavy-duty motorboats.

“So, education is more and more important, and people learning before they learn the hard way,” she added.

The TPWD website allows users to search for boater education classrooms in their area.

“We want people to be safe, we want them to be responsible, and we want to have fun,” Sorensen said. “It really is not a fun day when you’re dealing with an accident or injury on the water.”
Lewisville Lake Lewisville-Flower Mound-Highland Village May 2021 Lewisville Parks & Recreation Lewisville Economy Lewisville Lewisville Government
SHARE THIS STORY