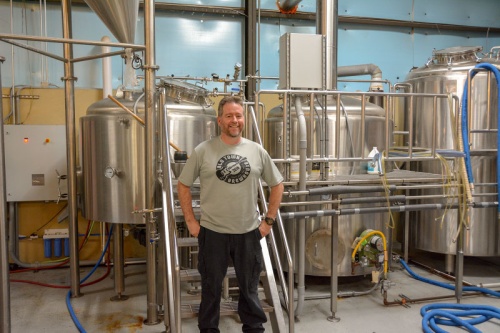 One Lewisville craft brewery owner is pushing for lawmakers to pass bills that will allow him to sell his beer to-go.

Bill Shaw, owner of Old Town Brewhouse—the only craft brewery in Lewisville—said beer brewers across the state have been fighting for years over what can be bought and sold at breweries.

Shaw said if the law does not change, he will more than likely have to leave the Old Town Lewisville area and switch to a brewpub. In order to become a brewpub in Lewisville, Shaw said he would have to sell food, which is not feasible for him.

“We can’t survive with just selling beer in our taproom in Lewisville,” he said. “It’s a great city, but the demographics and night life are not suitable for craft breweries.”

James Kunke, Lewisville Community Relations & Tourism Director, said city staff recognized Old Town Brewhouse was struggling due to not being able to sell off-premise. So after meeting with Shaw several times to talk about ways to help him, staff approached the council to pass a resolution in support of the proposed legislation.

The resolution approved at the Jan. 28 meeting allows the mayor and city manager to sign all letters, petitions and/or documents in support of the  two bills on behalf of the city.

“We think it’s a fairness issue,” Kunke said. “Not being able to sell off-premise is a noncompetitive hardship for small breweries. It hurts them, and that in turn hurts the towns where small breweries are a part of the
culture.”

Charles Vallhonrat is the executive director of Texas Craft Brewers Guild, which represents more than 200 Texas breweries and brewpubs.

Vallhonrat said to his knowledge no other craft brewery in the state has worked with its city council to have a formal resolution passed.

“We are excited that Lewisville did this,” he said. “We are planning to communicate this to all of our members and have them approach their city councils as well.”

What the bills would do

A pair of bills introduced to the state Legislature in January—Senate Bill 312, in concert with House Bill 672, seeks to allow craft breweries the same off-premises selling parameters as wineries and distilleries.

Vallhonrat said manufacturing breweries in Texas can only sell their beer for consumption in their
taprooms.

A local brewpub allows guests to bring a refillable container to fill up with their beer as well as can and keg beers from the brewery. Customers can also drink at their location. However, brewpubs are limited to 10,000 barrels a year in production while manufacturing breweries essentially have no production limits unless they go over 225,000 barrels a year, in which case they cannot sell for on-site consumption.

Cory Kuckinsky, co-owner of TKO Libations in Castle Hills, said he purposely decided to open as a brewpub versus a brewery because of the current law.

“We are a very small craft brewery, and part of the business plan was to sell to-go beers at our taproom,” he said. “To-go sales for us are quite meaningful to our success.”

“It’s economically very beneficial for breweries,” he said. “Customers coming in and being able to take the brewer’s beer with them builds greater awareness for that brand.”

He added to-go sales are also beneficial for distributors and retailers.

“They aren’t always going to go that brewery to get that beer,” he said. “They might get it at a restaurant or a six-pack at the grocery store.”

While most craft brewers are in favor of being able to sell their product to-go, not everyone sees the benefits.

Rick Donley is president of the Beer Alliance of Texas, which represents distributors. He said he is against the proposed bills as they are written.

Allowing sales for off-premises consumption in craft breweries not only disrupts the three-tier system of manufacturing, distribution and retail sales, but it also potentially harms businesses such as bars, convenience stores and grocery stores, Donley said.

It is not fair to other businesses, which are limited to how they can operate within the three-tier system, he said.

Vallhonrat said if the bills do not pass, he believes some breweries will make the switch to brewpub.

“But if the bill passes, we might see some adjustments back the other way,” he said. “It’s a decision that each brewer has to make, but we want to make sure that it’s known that it is not just a simple choice to switch to being a brewpub. There are a lot of restrictions to where some breweries can’t.”

Although similar bills filed in previous sessions have failed, Vallhonrat said he believes there is a better chance of the bills passing this session.

“I’m very pleased with our momentum and public awareness this time around,” he said. “Adding our political action committee has allowed us to get an additional public voice, and that has been very helpful.”