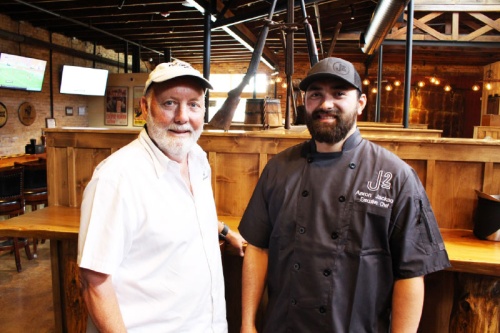 Executive Chef Aaron Jackson (right) has been with J2 Steakhouse since Jim Murray (left) opened the restaurant in 2018.

Jim Murray was 14 years old when he started bussing tables and cleaning dishes. Now, 46 years later, he is still pursuing his passion in the restaurant business.

Murray opened J2 Steakhouse in Old Town Lewisville in May 2018. The steakhouse is located in what was once the historic Lewisville Feed Mill.

The feed mill was established by the Polser family in 1886, though the building Murray transformed into J2 Steakhouse was built in 1905. Murray is not new to the local restaurant business—he has also owned Prairie House Restaurant north of Lake Lewisville for about 30 years.

Murray said he knew the old Lewisville Feed Mill would be a great location for a restaurant, so he was excited when he was presented with an opportunity to buy it.

“I loved the architecture of it,” he said. “The Polsers were receptive to selling it to me because ... I wasn’t going to tear it down. [I] wanted to bring something special to the old downtown Lewisville.”

Buying a building more than a century old presented Murray with some challenges, though. But after an intensive renovation and restoration process in which the roof was repaired and the walls  were rebuilt along with a myriad of other improvements, J2 Steakhouse was open for business. The restaurant offers an assortment of dry-aged steaks, Texas-inspired cuisine and a vast selection of drinks.

“Everything is made from scratch here … even the ketchup,” Murray said. “It’s all about quality, not quantity.”

J2 Steakhouse Executive Chef Aaron Jackson leads the kitchen. Jackson said his mission is to ensure every guest has the “experience of a lifetime” when visiting the steakhouse.

“We’re here at J2 having fun,” Jackson said. “This is the first kitchen where I felt like [everyone] is like a family.”