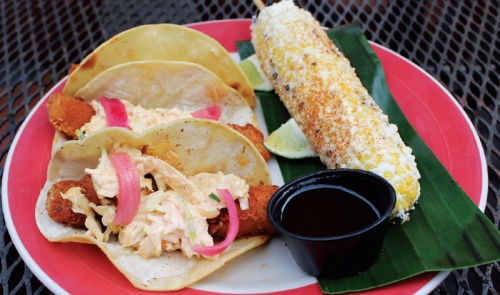 The Tacos Pacifico ($14 for three) feature fresh Costa Rican tilapia and a side of street corn on the cob.

Since co-owners David Mitchell, Larry Folk and Reagan Redus opened Fresco’s Mexicana in Highland Village in 2013, they have tried to remain true to their name, Fresco, which is Spanish for fresh.

“Everything we make on the menu is fresh, and that’s kind of a shout out to the quality of it,” Fresco’s manager Aaron Stout said. “We don’t bring in frozen anything; everything we make is made with fresh produce, and all the meats are cooked here.”

Stout said that Fresco’s quality food has won it several Best in Denton County awards since it opened in 2013. The restaurant, which also has locations in Watauga and Burleson, has won best Mexican restaurant three years in a row as well as best margarita, best patio, best guacamole and best queso. It has also been nominated for best place to meet someone.

Stout said the restaurant’s salsa is also a winner among the community.

“Our salsa alone is very unique,” he said. “We mesquite grill the tomatoes and jalepenos before blending them, and it is addicting—it is so good. We get told all the time that we have the best salsa in town.”

Stout said the owners chose the Highland Village location for its growing community and the building’s upscale interior and large patio where they host live music on Friday and Saturday from local bands.

The Fresco’s team gets involved in the community through hosting events and giving back to those in need, Stout said.

“We do what we call Dining Night Out,” Stout said. “And whether it’s a school or charity or things like that, everybody that comes in will donate 15 percent back to the charity, or school or function. We love to help in whatever way we can.”

Fresco’s also caters events and special occasions, such as birthdays, retirements and anniversaries.