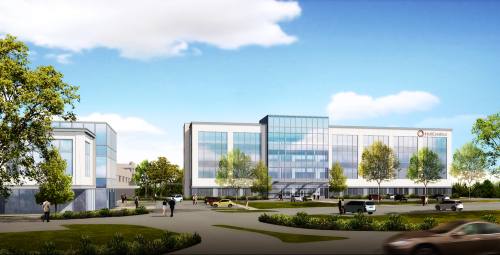 Construction on Lakeside International Office Center, which consists of two buildings south of the intersection of FM 2499 and Lakeside Parkway in Flower Mound, began July 17.

According to a July 17 press release, the project is being led by Realty Capital and Staubach Capital, which are based in Irving and Dallas, respectively. One of the office buildings will be a four-story, 120,000-square-foot structure, while the other building will be a two-story, 18,000-square-foot office facility.

“Flower Mound has established itself as an attractive area for new residents and businesses with a growing number of shops, restaurants, entertainment and residential options in the Lakeside mixed-use community,” stated Jeff Staubach, founding partner of Staubach Capital, in the release. “Lakeside International Office Center will be the first of its kind in this part of the metroplex, providing a premium office experience with top-of-class amenities.”

Realty Capital Managing Director Jimmy Archie stated in the release that the project was made possible by an incentive agreement from the Town of Flower Mound.

Flower Mound Mayor Steve Dixon said in a statement that the Lakeside International Office Center fits with the town’s master plan, which was adopted in 2001.

“Since the adoption of the Master Plan in 2001, the town of Flower Mound has envisioned corporate office buildings along International Parkway to serve both as an employment center and a boost to the Town’s commercial tax base,” Dixon stated. “The incentive agreement sends a strong message to the corporate office market that Flower Mound is committed to being a prime location and welcomes them to our community.”

The property will include a trail system that connects to The Shops at Lakeside, according to the release. The project is expected to reach completion by the end of 2020.

IntelliCentrics, a vendor-credentialing platform, is the center’s first tenant. The company will lease the entire 30,000-square-foot fourth floor.