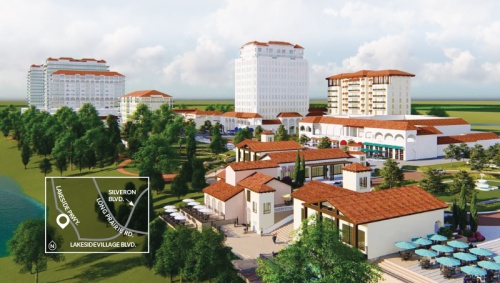 After six years of planning and several hours of public comments spread out over two planning and zoning commission meetings, a workshop and a Town Council meeting, Realty Capital was granted the rezoning it needed to construct the $1.2 billion Lakeside Village development.

Flower Mound Town Council unanimously approved the 35-acre development, which will complete the lakeside area, on April 18. The development, which will be located west of Lakeside Parkway and along Lake Grapevine, will include a mix of retail; restaurants; offices; possibly three hotels; and residential areas, which would come in the form of villas, lofts over retail and up to five towers.

“Lakeside Village will be of great benefit to the community from an economic development perspective, offering unique living, working, shopping and dining options that will not only serve our residents, but draw patrons into our community from outside of Flower Mound,” Economic Development Director Andrea Roy said. “The proposed project’s ultimate contribution to the property tax values in the community is estimated to exceed $1 billion, which will be an asset to the financial health of the community, but that is just the beginning; the positive economic impact of the project is far-reaching beyond the borders of the project.”

Lakeside Village will connect to Lakeside DFW, which consists of residential, retail and restaurants.

Although the development will add taxable value to the town, many residents are not satisfied with the development as it will cause more density, traffic and change the town’s skyline. Residents are primarily concerned about several towers along the lake, one of which could be 24 stories.


THE REQUEST FOR REZONING

In 2012 zoning for both Lakeside DFW and Lakeside Village was approved. However, in 2017 Realty Capital purchased a 9-acre tract referred to as the Hines Tract, to become part of Lakeside Village.

Realty Capital Managing Director Richard Myers said adding the Hines Tract was one of the reasons for the rezoning.

Additionally, Myers said Realty Capital did not put much thought into Lakeside Village in the 2012 plan because their primary concern at the time was Lakeside DFW.

“We didn’t put a tremendous amount of thought into [Lakeside Village] because we figured in six years we are going to come back anyway, and we are going to have learned a lot, like what the market wants.”

The residential towers were at the center of the public comments on the development with many residents debating on whether the higher density and the height of the towers were right for the town.

Lakeside DFW resident Jeffery Blasko said the previous plan called for mid-rise buildings and more commercial. He said the rezoning allows for more residential and less entertainment than what was previously promised for Lakeside Village.

“These high-rise towers are going to give the appearance of a downtown instead of an entertainment district,” he said. “It completely flips the dynamic of what most residents in Lakeside and within Flower Mound wanted in the Lakeside area.”

Business owners, such as Aaron McDaniel, who owns Paradise Bistro & Coffee in Lakeside DFW, showed up to various meetings throughout the rezoning process to show their support of Lakeside Village as they view the density of the towers and hotels as good for business.

McDaniel said his business in Lakeside is about twice the size as his other location in Granbury and it does about half of the sales.

“That’s the hope; the more residential that is here, the more opportunity we have as a restaurant to impress and serve others,” McDaniel said. “And ultimately with the high-rises [Lakeside DFW] gets a little more notice.”

“We need [Lakeside Village] to survive,” she said. “If we don’t take this opportunity for such a wonderful project we will end up like everything else in Flower Mound … going out of
business.”

Myers said residents in opposition were concerned that Realty Capital would not follow through with building commercial on the property. Realty Capital has plans to build 929 residential units.

“Those three [residential] buildings will not be built first necessarily,” he said. “If a hotel comes in and wants to go in and they’re the first people in the door then they’ll go first.”

Council also made an agreement with the developer that the town will make a decision within a year about whether council would like to fund a fine arts facility in the development. If it is not a fine arts center, the building will become an office building.

Myers said Lakeside Village will require $20 million of infrastructure, which includes all of the streets, the parks, the amphitheater, the parking garage for the restaurants, trails, streetlights and more.

“That’s very expensive for 35 acres— that is probably the most expensive infrastructure that we’ve seen on any of our projects by far,” he said.

Because of the infrastructure costs, Realty Capital and the town are considering creating a tax increment reinvestment zone district.

A TIRZ is an economic development tool in which a public entity or private developer invests in public infrastructure in an area. To repay the debt, the future owners or tenants within the zone pay portions of the future property tax revenue from within the TIRZ district.

Myers said if a TIRZ is not approved the infrastructure will be built in phases instead of all at once.

He said in six to nine months, work on infrastructure should begin.
SHARE THIS STORY