The council decided to set a speed limit of 50 mph from 1,900 feet south of State Highway 121 to the south city limits with Carrollton (see green line on first map below). This decision was made after a staff study concluded that the average speed on that stretch of land was 54 mph.
RELATED STORIES

In addition, the council decided on a school zone speed limit of 35 mph from 500 feet north of the north driveway for Memorial Elementary School to 500 feet south of Lake Falls Terrace (see orange line on second map below). Memorial Elementary School is a new Lewisville ISD school opening for the 2021-22 school year. The previous speed limit on Josey near the school was 50 mph, which has now been amended to 35 mph for student safety. 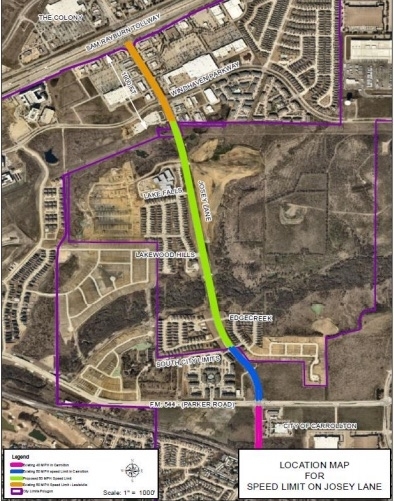 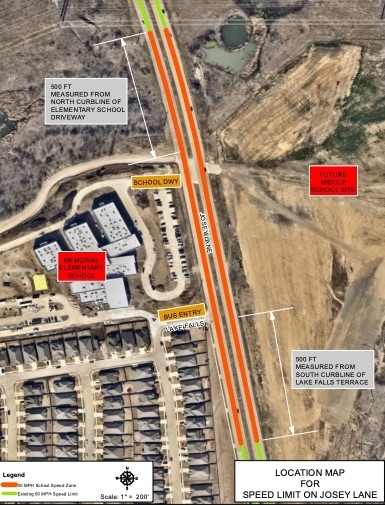 Spraying will be done in the morning hours and will be concentrated on creeks, drainage culverts and wooded wet areas, according to a city news release.

The cafe features a variety of smoothies, including Strawberry Chia Lemonade, Acai Berry Boost and Peanut Paradise, as well as sandwiches, wraps and flatbreads.

Natalie Reid-Knutson and her husband, Kjell Knutson, created a safe haven to help widows and widowers who are grieving.

The city of Lewisville is looking to use bond funds to replace its aging police and fire departments along Main Street with a new public safety complex.

The authentic Mexican restaurant offers dishes such as pozole, empanadas and nopal tortillas.

PediPlace in Lewisville and Our Daily Bread in Denton become partner agencies with United Way of Denton County.