Larry N. Patterson, executive director of the Upper Trinity Regional Water District, adds a piece to the puzzle that represents all the entities involved in the development of Lake Ralph Hall in Fannin County during a groundbreaking event in June. (Erick Pirayesh/Community Impact Newspaper)

Construction on a project that can be traced to a series of town hall meetings in the early 1990s is finally underway with the nearly half-billion dollar Lake Ralph Hall expected to provide water to Lewisville, Flower Mound and Highland Village as well as other North Texas communities.

“We identified that we believe we would have a shortfall if we didn’t secure a new water supply ... sometime between [2025] and [2030],” Patterson said. “So, this thing is coming just in time.”

Denton County officials in the 1980s identified that groundwater levels in the region were dropping and would not be able to sustain future population growth, he said. Once Upper Trinity was formed in 1989, it was decided more reservoirs would be needed to capture additional rainwater during heavy storm seasons, Patterson said.

Upper Trinity develops regional plans for water services while providing both water and wastewater services. Most of Denton County plus portions of Dallas County and Collin County are in its district.

The Texas Legislature requires the state’s water utility regions to update a 50-year water plan every five years. According to the 2022 draft of the state water plan, the 16 counties that make up the North Texas population that includes Upper Trinity are set to more than double over the next 50 years to nearly 15 million.

The lake is funded by a series of low-interest loans to Upper Trinity from the Texas Water Development Board’s State Water Implementation Fund. The multibillion-dollar fund was created by the board to “help communities develop and optimize water supplies at cost-effective rates,” the board’s website said.

Upper Trinity will then repay the loans through the rates it charges its members. Some Denton County officials have expressed concern that Upper Trinity’s member costs may rise sharply in the future due to these increased loan payments. Patterson said that by spreading out the loan payments over a number of years and across a customer base with an increasing population, Upper Trinity will be able to keep service costs affordable.

Lake Ralph Hall will be located on the North Sulphur River in southeast Fannin County, north of the city of Ladonia. Due to Texas state requirements, Upper Trinity must first meet the water needs of the Sulphur River area before sending water to the Upper Trinity members in Denton, Dallas and Collin counties.

The lake is named after the late U.S. Congressman Ralph M. Hall, a strong supporter of the new reservoir. Hall participated in those Ladonia town hall meetings decades ago. He urged the community to “think bigger,” as officials pondered how to get a lake built in their region. Officials credit Hall with suggesting a partnership between the town and Upper Trinity.

In addition to providing water to the region, the lake is expected to serve as a destination for recreation and sightseeing. A bridge more than a mile long will be constructed over the lake.

Other projects include a raw water pump station, a 32-mile raw water pipeline, a balancing reservoir, an operations facility, and renovations to roads in the area.

The project is one of the largest lakes to be built in Texas in decades.

The June 16 groundbreaking ceremony was hosted at the future site of Leon Hurse Dam, named after Ladonia’s former mayor, another longtime supporter of the project. The dam will be over 2 miles long and 110 feet tall.

The lake, capable of storing 59 billion gallons of water, is expected to be complete by 2025 and begin delivering water by 2026.

Richard Lubke, Highland Village representative for Upper Trinity’s board of directors, said the city took an early and active role in support of the lake’s construction.

“The [city] was saying, ‘This is something that needs to happen for southern Denton County,’” he said. “While maybe other communities were saying, ‘No, this isn’t something that should [happen].’”

While Lewisville is a member of the water district, it contracts with the city of Dallas to use raw water from Lewisville Lake. Lewisville also operates its own treatment plant to serve residents.

Lewisville Mayor TJ Gilmore said the creation of Lake Ralph Hall and Lewisville’s membership with Upper Trinity gives the city more options for how it acquires water in the future.

“This gave us an opportunity to say ... ‘Dallas, we need to negotiate,’” he said. “This will give us another way, another resource in the future.”

“We need all those sources plus Lake Ralph Hall to meet future demand,” Patterson said. “Initially, Ralph Hall will provide excess water from what our immediate needs are.”

Patterson said a lot of cities and organizations worked in unison to create the lake.

“We may not have all agreed along the way, every twist and turn, but ultimately we all came together, and we did it.” 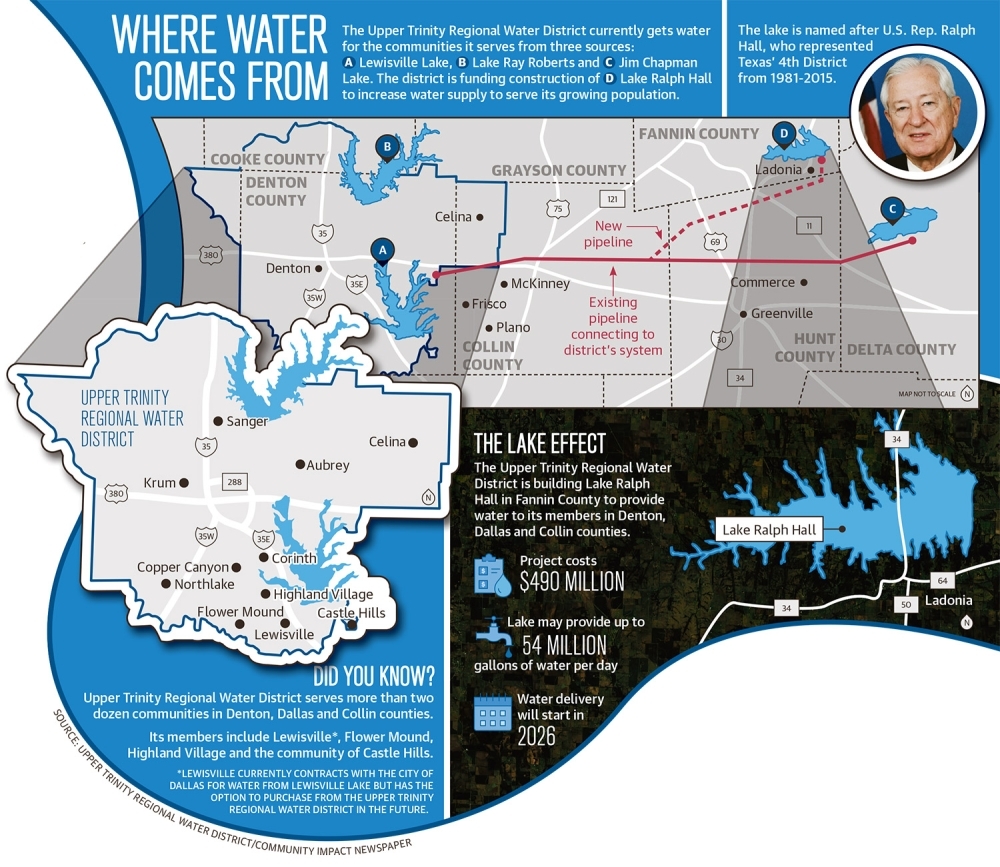 Click here to view the e-edition of Community Impact Newspaper where this story appears.