The water tower at I-35E and Main Street is no longer connected to the city's utility system. (Courtesy Molly Michaels Copeland)

Lewisville High School’s Fighting Farmers mascot has adorned the water tower in the heart of the city for nearly 50 years. But the decommissioning of the 170-foot-tall tower earlier this year from the water system meant the city could no longer tap its utility fund for maintenance.

More than a year ago, the city established a working group to consider what to do with the tower. But the group’s preferred option to keep the iconic landmark proved too costly. Repainting and refurbishing the water tower that features Fighting Farmer Big John comes with an estimated price tag of $722,000, according to the city.

Fundraising efforts have been slow to catch on. So city officials are moving ahead with plans to demolish the tower and instead incorporate the mascot into concrete murals as part of the Texas Department of Transportation’s expansion project for I-35E.

“In the meantime, it’d be nice to leave the water tower up until those were built,” said James Kunke, community relations and tourism director for the city. “But that’s going to take a couple of years to get that project built. And we don’t think the tower has that long as a stable structure.”

He said city officials are trying to determine when the tower needs to be removed.
RELATED STORIES

Evolution of the tower

The water tower was erected in 1960, but the Fighting Farmers logo did not appear until 1973, the year after the city’s first high school competed in the state football championship.

The tower was repainted in 1994 to honor the Lewisville High School football team’s first state championship win in 1993. It was updated after the school’s second state title in 1996.

Michael Odle was a player on that 1996 championship team and is now the high school’s head football coach. He is also a member of the water tower working group.

“It’s been a thing in Texas ... to put football state champions on water towers,” he said. “I mean, that’s just part of being in Texas, right?”

Gary Kerbow, a member of the working group, also has deep roots in the community. He worked for Lewisville ISD for nearly two decades and was a stadium announcer for high school football games. In 1994, he wrote a book about the history of the team titled, “Friday Night Farmers.”

Having the water tower imprinted with the Fighting Farmers mascot “became somewhat of a novelty for people,” Kerbow said. “That’s how Lewisville became known.”

Efforts to preserve the tower

Fast forward to the city’s recent decision to disconnect the water tower from the city’s utility system.

“Frankly, where it’s located and the size of the tower ... it was probably doing more harm than good,” Kunke said.

In early 2020, the city established the working group consisting of Lewisville High School alumni, city staff, a current LHS student and LHS faculty representatives. Their job, as directed by the City Council, was to consider options for a highly visible landmark that included the Fighting Farmers presence in some manner.

In March, the group proposed rehabilitating the tower as a landmark. The estimated cost was $722,000. 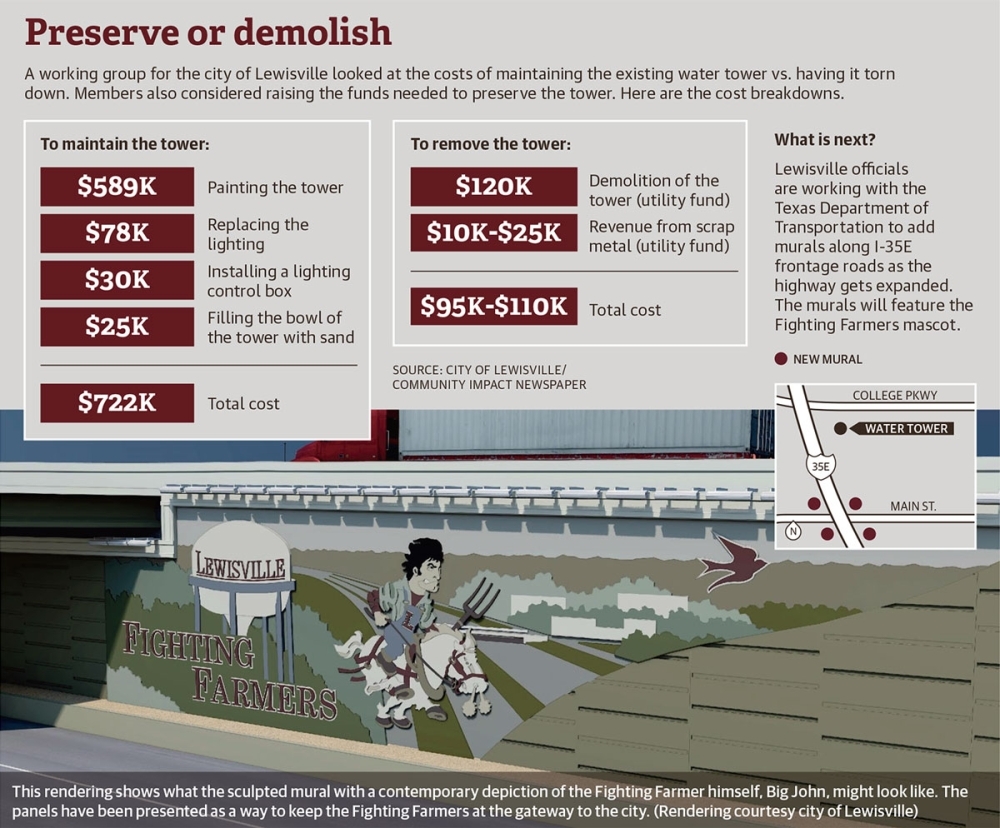 “[The council] had some sticker shock,” Kunke said of that option.

“But as it continues to age and degrade, that price tag is going to go up, and that’s a huge concern for me,” Green said.

The last time the water tower was painted was 24 years ago. At that time the cost was $210,000. City officials say it costs $10,000 to $15,000 to maintain a tower like that on an annual basis. When the tower was a part of the city water system, the costs were covered through the utility fund, but now that the tower no longer works, the money has to come from the general fund or somewhere else.

In April, members of the working group started raising funds. They never had a firm goal in mind, but hoped their efforts could sway the council, according to Kunke.

“The idea was, if they could get donations or commitments for maybe half the cost from the community, the council might feel more comfortable with funding it,” Kunke said.

The group organized on Facebook under the name “Save the Tower!” and launched a fundraising campaign on www.pledgecents.com. As of June 11, it had raised $3,995.

In May, group members again presented the council with their preferred option of keeping the tower. But they also offered two alternatives.

The first would have created a nonprofit to maintain the structure. The nonprofit would need to obtain insurance, cover 100% of all costs and ensure the water tower met city standards.

The group’s third option involves demolishing the tower and incorporating the Fighting Farmers theme into concrete murals as part of the expansion of I-35E at Main Street. The murals would come at no cost to the city and would be incorporated into the existing design.

“We’ve been looking at this for a long time and just had to compromise,” said Kara Stone, a Lewisville High School graduate and member of the working group. “We need to move forward. We don’t need to go backward. That mural is going to be on the wall forever because that highway is going to be there forever. It’s a great compromise. I believe that.”

Lewisville is exploring the option of salvaging some parts of the water tower, but officials have not heard yet from the vendor whether that is possible, Kunke said. Ideally, the city would wait to demolish the tower until after the state installs the four murals along the interstate, but Kunke said that could take as long as two years.

Eyad Salloum, who owns Weichert Realtors-Classic in Lewisville, talks about the housing market.