Construction is underway on the $500 million Lake Ralph Hall project that will eventually provide water to Lewisville, Flower Mound and Highland Village as well as other North Texas communities.

The groundbreaking ceremony was held June 16 for one of the largest lake projects to be built in Texas in decades. Lake Ralph Hall will be located on the North Sulphur River in southeast Fannin County, north of the city of Ladonia.

The lake is named after late U.S. Congressman Ralph M. Hall, who was a staunch supporter of building the new reservoir.

The concept and creation of the lake is spearheaded by the Upper Trinity Regional Water District. The district was created by the Texas Legislature in 1989 for the benefit of cities and utilities in the Denton County area. It develops regional plans for water services, while providing both water and wastewater services. All of Denton County and portions of Dallas County and Collin County are in its district.

The ceremony was held at the future site of Leon Hurse Dam, named after Ladonia’s former mayor and a long-time supporter of the project. The dam will be over two miles long and 110 feet tall. The lake, capable of storing 59 billion gallons of water, is expected to begin delivering water by 2026.

A mile-plus-long bridge will be constructed over the lake for crossing and sightseeing. Other projects include a raw water pump station, a 32-mile raw water pipeline, a balancing reservoir, an operations facility and renovations to nearby state and county roads.

Miles of underground pipe will be used to connect the future reservoir to the existing pipelines that serve the cities in the water district.

Lewisville Mayor TJ Gilmore attended the event in support of the future lake and what its construction will mean for his city’s residents.

“It secures our water rights in the future as we continue to grow in North Texas,” Gilmore said.

The city of Dallas owns the water rights to Lewisville Lake, which the city of Lewisville pays to use. Gilmore said partnering with Upper Trinity in the creation of Lake Ralph Hall will give Lewisville more options for how the city acquires water.

“This gave us an opportunity to say ... 'Dallas we need to negotiate,'” he said. "This will give us another way, another resource in the future.” 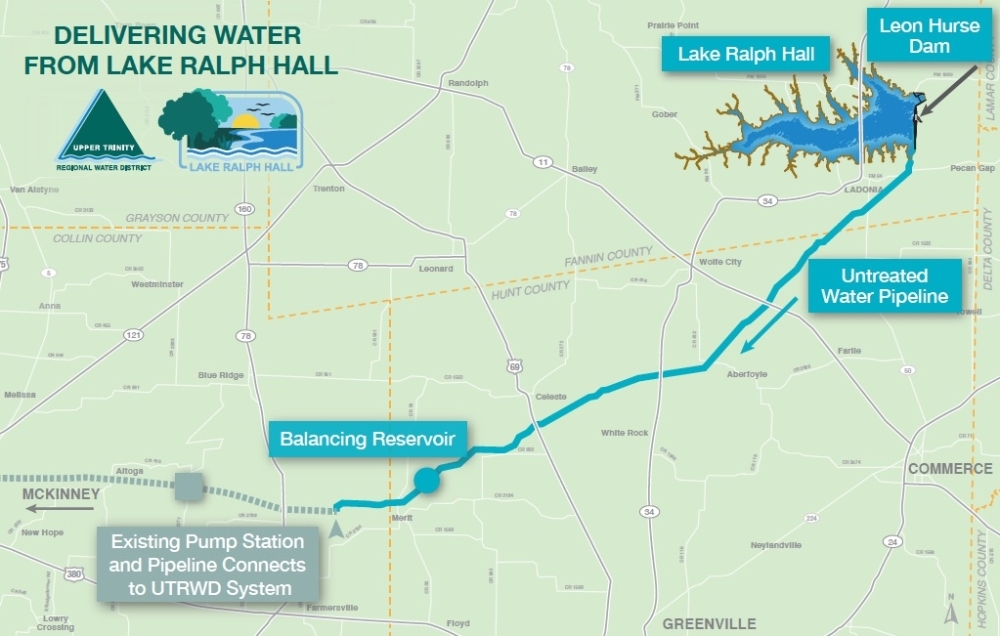 The store will open on Aug. 9.

The nonprofit's opening was held on June 14.

Construction of the fire training facility is expected to begin this fall.