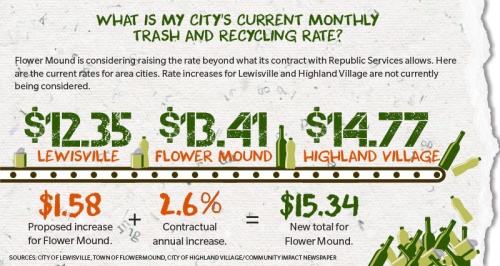 Flower Mound Town Council will soon consider raising residents' waste-disposal fee, though a date for the consideration has not yet been set.

Flower Mound residents may be looking at an adjusted bill for waste services come October as a result of changes in the recycling industry.

Demand in worldwide recycling markets has shifted, and there is an increase in processing costs, according to recycling experts. People are also tainting the recycling stream with materials that cannot be recycled, which can both damage equipment and affect pricing. Town Council heard a presentation from service provider Republic Services about these industry trends at its June 17 meeting. The company has requested the town raise the current rate by $1.58 per household each month. When combined with its contractual annual increase of 2.6%, the monthly fee would be bumped from $13.41 to $15.34.

Council Member Claudio Forest said he believes most residents will not object to this increase, but he is concerned about future years, especially if recycling costs continue to rise. The issue is about balancing fiscal and environmental responsibilities, he said.

“As a resident, I don’t particularly like the idea [of a rate increase],” said Marilyn Lawson, board chairperson of nonprofit Keep Flower Mound Beautiful, which promotes recycling as part of its mission. “But on the environmental side, I think it might be a necessity. … One of the big problems that we have is putting stuff in our landfills. Our landfills are not going to last forever.”

Recycling helps reduce waste that would otherwise be directed to landfills. But experts have observed several challenges over recent years that have led to rising costs.

“It actually costs Republic Services about $30 to bury a ton [of materials] in a landfill, and it costs us about $90 to process it through the recycling facility,” she said at the June 17 meeting.

Supply is exceeding demand, Harwell said, but it is not a problem unique to Republic Services.

“It is definitely a global issue,” she said.

Contamination essentially refers to things that cannot be recycled, she said. For example, if a jar of peanut butter with sticky remnants is added to the recycling bin, it will lower the value of the entire bale of plastic when it becomes compacted.

China—the world’s biggest buyer of recycled materials for decades—has steadily tightened restrictions on imports in an effort to decrease amounts of contaminated materials, Harwell said. It has announced plans to completely eliminate these imports by 2020.

Some materials have also lost value due to excessive supplies over demand, she said. For example, there is a flood of cardboard from boxes in the market caused in part by the popularity of online shopping. As a result, cardboard has significantly dropped in value. Another devalued material is glass, which some facilities no longer accept anymore.

“There is no value in glass,” Harwell said. “But [Republic Services is] paying to recycle it. … We have a contract with a company that accepts a lot of our glass because we refine it down to sand. Not every processing facility in Texas has the capability of doing that.”

What is considered recyclable can vary depending on the processing facility, Harwell said. But there are still some regionally accepted products.

“That would be your plastics, your aluminum, mixed paper and cardboard—that’s pretty standard across the board,” she said.

Reducing contamination may help raise the value of some recyclable materials, said Jordan Strickler, the former environmental control services manager for the city of Lewisville. Strickler recently left this role for a position with another city.

Unlike Flower Mound, neither Highland Village nor Lewisville is considering an increase outside the annual, contractual rate adjustments, according to city officials.

But there is a big push to be more conscientious about recycling, Strickler said.

“We want to make the materials a better quality so that this can be sold for a higher price,” Strickler said. “We can’t control where the markets are going, but we can try to help increase the value of our products.”

Residents can help increase the value of recycled materials sold to manufacturers by reducing contamination, Strickler said. This means knowing which items belong in the recycling bin and which belong in the trash.

The North Central Texas Council of Governments launched an outreach campaign to educate citizens about recycling, said Cassidy Campbell, a senior planner for the council. The goal of the council’s campaign is to reduce both wasted recyclables and “wish-cycling,” she said.

Wish-cycling—or wishful recycling—refers to placing nonrecyclable materials, such as jars with food left in them, batteries and plastic bags, into a bin in hopes that they will be recycled, Strickler said.

Batteries can cause fires if not properly disposed, and plastic bags can get caught in processing machinery and cause damage, Campbell said.

“People want to do the right thing. They don’t want to be bad recyclers,” Strickler said. “They look at something, and they [think], ‘This should go in the recycling,’ and instead of doing that—if they don’t know—it’s actually better for it to go into the trash.”

“What we want to do is find out what their contamination rate is today, so that we can educate the residents that are on those routes to clean up that material,” Harwell said.

Town Council is awaiting more information before making a decision on whether to increase rates more than what its contract allows. Harwell is set to give another presentation at a later meeting. A date has not been set.

If the $1.58 increase is not approved, Republic Services will continue losing money, Harwell said.

Harwell has worked with multiple communities for waste disposal, and not all of them participate in recycling programs because of the cost. But it is essential for conservation, she said.

“The area is booming. Everyone wants to live here. The more people that move here, the more trash we have, the more recycle [materials] we have. … We’ve got to get serious about protecting the environment.”