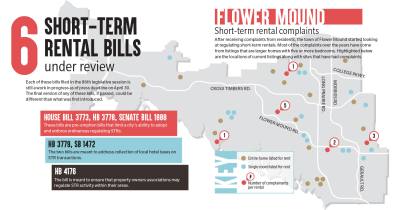 Flower Mound’s efforts to regulate short-term rentals, or STRs, are on hold while several bills work their way through the Texas Legislature, including one that would prohibit cities and towns from having any rules on rentals.

The town has been dealing with everything from resident complaints to local tax collection for homes that are rented out through online platforms such as Airbnb or HomeAway.

More than 24,000 guests stayed at Airbnbs last year throughout the county, including Lewisville and Flower Mound, according to Airbnb data. That same year, the home-sharing platform indicated hosts earned more than $2.8 million in rental fees.

However, Flower Mound collected no hotel occupancy taxes from them in the last two fiscal years, according to Assistant Town Manager Tommy Dalton. He said it is difficult to track who is renting their property online.

“Many cities impacted with STR properties are struggling to collect payment and are looking into requirements and processes in order to do so,” he said.

But legislators may weigh in on the issue before their regular session ends May 27. One bill, if passed, would give homeowners associations the ability to regulate STRs within their neighborhoods. Two others would address local tax collections. And three bills are aimed at limiting a city’s ability to adopt and enforce ordinances on STRs.

Flower Mound resident Ken King said he would like to see some restrictions on STRs.

“They should absolutely be regulated,” he said. “Neighborhoods are for residents, and they need to be protected from the problems associated by short-term rentals.”

Although cities such as Grapevine and Highland Village have banned STRs altogether, Flower Mound has not yet decided what to do, Dalton said.

“Council has been diligent in asking staff what other cities are doing,” he said. “The council is also following other litigation cases and general debates in the state on the topic.”

A series of complaints

Property Standards Manager Christa Crowe said over the last couple of years the town has received multiple complaints about STRs.

“Generally, the listing has been for 10 guests or so; however, some of these are for larger, five-bedroom or more homes,” she said.

Crowe said complaints include public intoxication, too many vehicles parked on the street, noise, general safety concerns about the security of the neighborhood and misuse of a fire pit during a burn ban.

Additionally, Crowe said several residents complained about one of the properties at the Jan. 9 board of adjustment meeting.

Dalton said the town’s regulations would potentially address the capturing of local taxes from STR properties.

Dalton said the town identified three properties that were registered as short-term rentals through the state.

“... Two do not appear to be advertising anymore,” he said. “We are also unsure if any actual transactions took place.”

He said many property owners do not realize they are subject to the local hotel tax and are unsure of how to pay.

“If the town looks at creating an ordinance, this would be one facet to examine and address,” Dalton said.

In its first year of the agreement, Airbnb delivered $15.3 million in tax revenue to the state, almost double the $8 million originally projected.

“This comes as Texans increasingly embrace the home-sharing platform as an opportunity to earn supplemental income and make ends meet,” he said. “There are now over 30,000 Texas residents who share their homes as Airbnb hosts, with the typical DFW-area host typically earning about $6,800 annually in supplemental income.”

For example, Airbnb has citywide registration systems in Denver, Chicago, New Orleans and San Francisco.
As of May 1, Plano is the first city in Texas to have its local hotel taxes collected by the company.

In Highland Village, staff is looking into the town’s 1995 ordinance that prohibits STRs.

“We are reviewing our ordinance in comparison to our neighboring cities, and we are waiting to see what comes out of this legislative session,” said Laurie Mullens, the city’s director of marketing and communications.

James Kunke, Lewisville Community Relations & Tourism director, said the city does not regulate STRs and has no plans to do so.

Dalton said if the bills do not pass, Flower Mound staff will move forward with its research.

“[Staff will] then present draft standards to council for feedback and guidance, and then begin the formal process for adoption,” said Dalton, adding that the process could take six to 12 months. “The timing will be dependent on the extent the town wants to regulate the properties, the feedback from the council and community, and how the item is prioritized.”
SHARE THIS STORY

Construction is underway on the $500 million Lake Ralph Hall project that will eventually provide water to Lewisville, Flower Mound and Highland Village, and other North Texas communities.

The Row House offers cardio-intensive workouts for all body types.

Adam Schiestel was also sworn in to fill the Place 1 council member seat.

The school mascot will be incorporated into concrete murals as part of the Texas Department of Transportation’s expansion project for I-35E at Main Street.

Proceeds from the June 19 event will go to the Loan-A-Life Jacket program with the Grapevine Fire Department.

Parker, R-Flower Mound, also spoke about the COVID-19 budget and Texas bouncing back faster than other states.