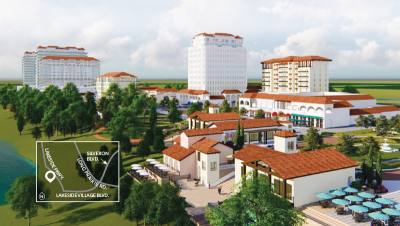 Flower Mound Town Council was expected to make a decision on whether it would establish a $20.5 million tax increment reinvestment zone, or TIRZ, for Lakeside Village at its May 6 meeting.

However, the item was postponed for at least 60 days at the request of the developer, Realty Capital.

The developer asked that it be postponed to allow them to speak with the new council members who were elected on May 4: Ben Bumgarner and Jim Pierson.

Council members were previously split on whether they wanted to hire a consultant to do a feasibility study on the TIRZ. They voted 3-2 on March 4 to approve a request from town staff to award a $50,000 consulting contract with Hawes Hill & Associates to move forward with the next step of creating a TIRZ for the Lakeside Village development.

Lakeside Village, which will be located west of Lakeside Parkway on 35 acres, will include a mix of retail, restaurants, offices, possibly three hotels and residential areas, which would come in the form of villas, lofts over retail and up to five towers.

The TIRZ, if approved, will allow the town to use property tax revenue to reimburse Realty Capital for building public infrastructure.
SHARE THIS STORY