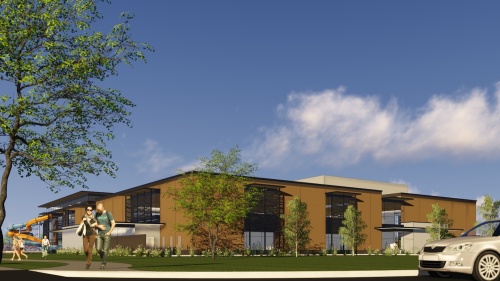 The multigenerational center is expected to open in 2020.

Parks and Recreation Director Stacie Anaya said Thrive will encompass the spirit and essence of the center.

“Thrive—that’s what we want people to do when they step into the facility,” she said."Thrive is very marketable for us in terms of what we can do for programs and fliers."

Anaya also presented a second choice to council, Rise, which had been previously pitched to council on April 4.

After the April 4 pitch, council decided to put together a committee on May 22 to come up with potential names. The committee met on June 11 and suggested 29 names, which were then narrowed down to Thrive and Rise. On June 26, the committee selected logos and tag lines for the two names.

Council Member Ferguson said he was against Rise because a survey indicated that most people associate it with a church and the word means different things in other languages.

The new multigenerational center will be located where the current Memorial Park Recreation Center is at 1950 S. Valley Parkway, Lewisville. Ground will break on July 20 and is expected to be complete spring 2020.

In a workshop, Anaya also informed council of where Senior Activity Center and Memorial Park Recreation Center services will be relocated to during construction.

On July 23, Senior Activity Center activities will be moved temporarily to Music City Mall Lewisville for the duration of construction. The space will be located on the second floor near Macy’s. Anaya said Entrance 4 will be the main entrance to the center. Additionally, she said the mall has agreed to add 10 handicap spaces. During July 9-20 interim operations for the SAC will be held in the Community Room.

For more information on the center, visit here.
SHARE THIS STORY