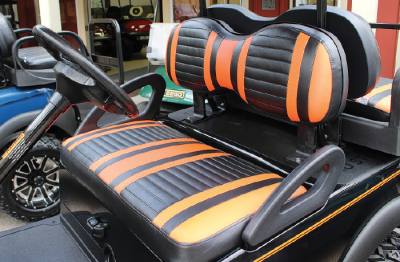 At Highland Village City Council's late work session Tuesday night, the council held a lengthy discussion on proposed regulations relating to the use of neighborhood electric vehicles, low-speed vehicles and golf carts in the city.

As it stands, state law allows golf carts to be used in master-planned communities, such as Highland Shores. However, in all other subdivisions in Highland Village that have been developed as straight zoning, state law does not apply. As a result, the council is working to adopt an ordinance that will provide regulations for the usage of golf carts, NEVs and LSVs within the city.

Some of the proposed regulations included:

•The individual has been issued and possesses a valid driver's license.
•The driver and all passengers of a golf cart or NEV must be wearing a seatbelt while the golf cart or NEV is in motion.
•Except for public safety personnel, golf carts and NEVs shall not be operated on or within any public park, sidewalk, pedestrian walkway, jogging path, park trail or any location normally used for pedestrian traffic.
•No person younger than 6 years of age may be transported in a golf cart or NEV unless restrained by a safety car seat to the same extent required for transportation in a motor vehicle.

Some of the longer parts of the discussion centered on whether golf carts and NEVs can be operated at night and what should be the maximum speed limit on a public street on which a golf cart or NEV can be operated on.

The smaller store located outside of a mall setting offers a specially selected assortment of Macy’s branded fashion as well as home, beauty and gift items.

The city of Lewisville will hold four public hearings to discuss the annexation of Castle Hills.