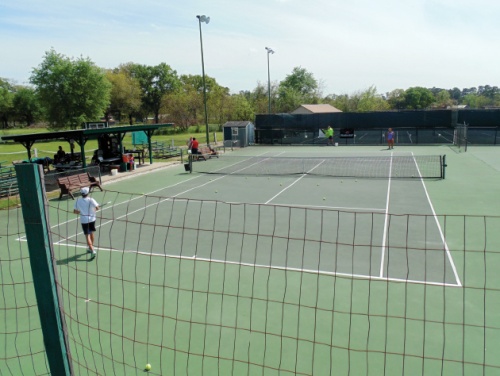 When looking for ideal locations, staff members based it on several requirements. Those requirements included a minimum of 8 acres (although staff prefers 12-14 acres), on or close to major thoroughfares, having utilities nearby and proximity to adjacent homes.

Staffers said it would cost around $4.3 million to build the tennis center and around $2 million to purchase the land. It would feature a pro shop and 12 lighted tennis courts.

Mayor Tom Hayden said this is something the town has been talking about for 15 years and suggested calling a bond election in May to help fund the tennis center.

The four locations presented were:
1. Leonard Johns Park (Timber Creek Road)
The property, which is owned by LISD, is centrally located and has access to utilities, according to staff. However, Hayden said he spoke with the school district last week and he does not think "it's going to be a realistic option." The property is also primarily located in a flood plain.

2. Gerault Park/Community Activites Center (Gerault Road)
Parks and Recreation Director Chuck Jennings said this location presents many challenges. Cons included a limited amount of space to work with (3.7 acres), it is close to the Bakers Branch neighborhood, there is a lack of space for additional parking and it would negatively affect Heritage Park and the multipurpose field. Additionally, adding a tennis center there would make it hard to expand the CAC, which the town has plans to do in the future.

3. LISD property near Liberty Elementary School (Flower Mound Road)
Staff members said this site would make for a great location; however, LISD is not willing to sell its property. Pros included it being centrally located, located away from homes and having great access.

4. Dunham Ranch recreational area (south of Cross Timbers Road on Dunham Road)
The undeveloped land is owned by the city; however, staffers said it is in an inconvenient location and has no potable service, no sewage service and an unsafe traffic access. Also, the intent for purchasing the land was to provide an additional multipurpose field for residents on the west side of town.