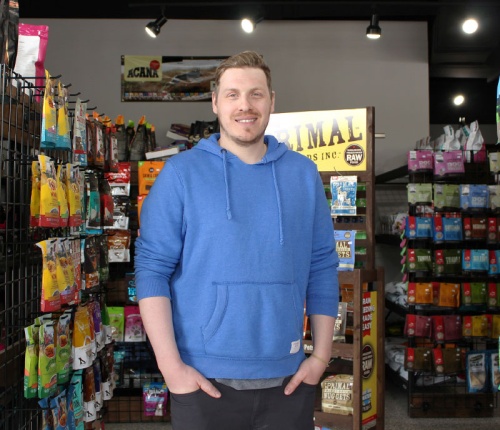 Tucked away in the Castle Hills development in Lewisville is a shopping center where residents can shop and eat, or if they have a pet, take them to get a treat at Castle Hills Pet Supply.

Since 2014, the locally owned pet store has provided customers with specialty pet foods, toys and treats.
Six days a week, customers can walk in and have co-owner Jason LeFebvre greet them.

“That’s what makes our store different from others,” he said. “I have a personal relationship with a lot of my customers. I’m honest with them, and I’m always willing to listen to them.”

When LeFebvre and his brother-in-law William Welborn opened the store, LeFebvre admits they had a learning curve to overcome.

“My brother-in-law came up with the idea to start the store,” he said. “His mother owns one out in Estes Park, Colorado, called Estes Park Pet Supply.”

At the time Welborn was running a garage floor company, and LeFebvre was working in downtown Dallas as a graphic designer.

“He came to me with the idea, and I was ready for a change,” he said. “We both had animals in the past, but we really didn’t know a lot about the food game.”

Since then LeFebvre said he has learned about the “nutrition game” through talking to food representatives and doing his own research.

“Some of it is just figuring out what you believe and going from there,” he said. “For example, I believe a dog’s natural diet is more meat-based, and frozen food or freeze-dried food is better than kibble.”

LeFebvre said most of the foods he carries he personally believes in and has tried on his own pets.
“There are some things I have to carry because they are well-known and they sell, but I try to work those things out and convince people to try another brand,” he said.

“I enjoy being around the dogs that come in; it’s fun,” he said. “I also like the fact that each day is going to be different from the next.”