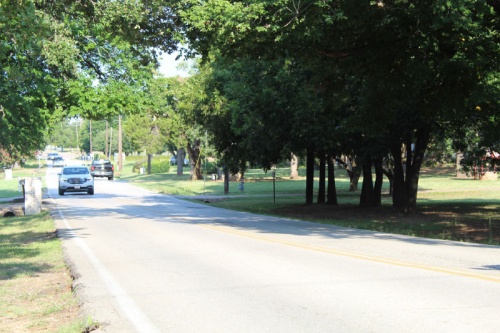 The roadwork project will improve a roughly 3/4-mile stretch of Johnson Road in Keller.

The city of Keller is planning to tackle multiple issues along one of its major east-west roadways.

City officials are considering their options to improve a roughly 3/4-mile stretch of Johnson Road between Hallelujah Trail and Rhonda Road. The focus includes drainage and safety upgrades for drivers and pedestrians.

Depending on the type of improvements and the city’s timetable, the Johnson project could cost between $5.5 million and $6.4 million. Construction could begin in spring 2020 and take 12-18 months to complete, according to city officials.

The work is expected to affect 5,000-7,000 drivers per day and between nine and 20 homes, according to the city. Construction will also affect traffic near Keller High School and Keller ISD’s athletic complex.

With input from Keller City Council and residents, city officials could present a construction plan to council by the end of the year.

Keller Director of Public Works Alonzo Liñán said the aim of the project is to improve safety and mobility along the road.

The need for improvements

Between Hallelujah and Rhonda, Johnson is two lanes with one lane in each direction. Bar ditches are on either side.

According to the city, the road’s paving is in poor condition, and the ditch capacity is insufficient. Other problems include a lack of streetlights and sidewalks.

Drivers are also having a hard time turning left on Johnson, and with no sidewalks or trails, pedestrians and cyclists are using the roadway to travel, Liñán added.

Residents along Johnson are also struggling with the lack of space  between the roadway and their homes.

“There’s no shoulder on the road, and every time I have to take the trash out, I almost get hit. Any time I go to the mailbox, I almost get hit,” said Howard Stone, who has lived on Johnson for 30 years. “It’s a mess.”

To improve the roadway itself, Keller officials are considering whether to keep Johnson a two-lane road or expand it to three lanes.

If the city decides to keep Johnson a two-lane road, it plans to widen Johnson’s existing travel lanes. Maintaining the road’s two lanes would mean less right of way to buy and lower project costs, according to city officials. However, a two-lane road would also mean less drainage capacity and challenges for mobility and vehicle safety, officials added.

If the city pursues a three-lane project, it would add a turn lane between the road’s two existing lanes. The three-lane option would improve drainage capacity, pedestrian mobility and vehicle safety, Keller officials said.

However, the city would have to acquire more right of way and pay more for the project.

These issues will have to be discussed before a final construction plan is presented, Liñán said.

“If we go with the more expensive [option], there is potential that we may have to go after additional funding to fully fund this project,” he added. “If we go for the least expensive [option], it may not be as effective ... but we can stay within our original [budget] estimates.”

While improving Johnson’s existing roadways, city officials are proposing adding a roundabout at the intersection of Johnson and Keller-Smithfield roads.

The single-lane roundabout would improve safety there, officials said.

In addition to roadway improvements, the city is considering adding sidewalks and green space on either side of Johnson.

Option 1 includes green space between the roadway and a pavement sidewalk on both sides of the road.

Jill Pahl, who has lived on Johnson for eight years, said the sidewalks would improve safety for students walking along the road.

“All of the kids who walk to the high school ... walk on the grass or on the side of the road,” she added. “If they had a shoulder or a sidewalk, they would have somewhere else safer to walk rather than right where traffic is.”

While the city works on the roadway, it is planning to tackle drainage issues along Johnson. Currently, the road has a bar ditch drainage system that varies in width and depth and does not have enough capacity, Keller officials said.

The city is considering two options for drainage upgrades. It could build non-curbed bar ditches to help keep a rural feel along the road. The ditches might have a lower cost and shorter construction time, city officials said.

However, the ditches would require more right-of-way acquisition and reduce pedestrian and vehicle safety, according to city officials.

Keller officials are also considering a curbed roadway system, which would require less right-of-way acquisitions and improve safety. But the system could take longer and be more expensive to construct.

Once construction begins, the city said it will work with Keller ISD to coordinate any closures or detours that might be needed around Keller High School and its athletic complex.

Liñán said the city could also use its website, social media, door hangers and flyers to keep residents informed.

For drivers looking to avoid the construction altogether, Liñán recommends those traveling east or west use FM 1709, also known as Keller Parkway. The road runs parallel to Johnson to the south.

For northwest travelers, he recommends using Pearson Lane, located to the east of Johnson, or Bourland Road to the west of Johnson.
SHARE THIS STORY