Fort Worth studying safest ways to direct traffic at intersections 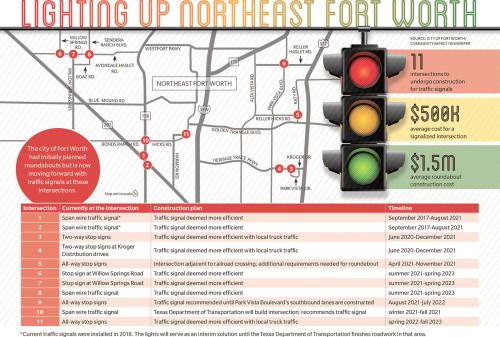 Fort Worth is installing traffic signals rather than roundabouts at 11 intersections in the northeastern part of the city. The effort comes as officials continue to study the safest way to direct traffic at intersections.

Fort Worth City Council approved the installation of the traffic signals during its Aug. 20 meeting. A bond of more than $261.63 million was approved by Fort Worth voters in 2018 for street and mobility improvements. Projects identified in the bond included installing roundabouts at the 11 intersections.

Prior to building the roundabouts, the city of Fort Worth performed more detailed reviews of traffic counts and available rights of way at the 11 intersections. Some intersections were also analyzed to look at other factors, such as roadwork being constructed nearby and the possible effects of roundabouts on railroad crossings.

“The analysis performed [for the 11 intersections] … includes a review of crash data, current and future traffic, and development as well as alternative analysis for addressing congestion and safety,” said Lauren Prieur, interim assistant director for capital delivery with the city of Fort Worth.

For most of these intersections, signals were deemed more efficient for traffic flow, according to council documents.

Fort Worth officials could still consider roundabouts at other locations where there have been a significant number of severe crashes, according to Tanya Brooks, assistant director for the city’s transportation and public works department.

In particular, the city is studying intersections that previously had red light cameras, which were banned earlier this year under a new state law. The city has seen a recent uptick in the number of crashes at those intersections, Brooks said.

Roundabouts reduce the severity of crashes because drivers must slow down and yield to use them, she said.

“Looking at what tools we use to improve safety at the intersections, roundabouts have risen to the top as one of our choices to reduce crashes,” Brooks said.

The average signalized intersection has a construction cost of $500,000, while the average roundabout construction cost is estimated around $1.5 million, city officials said. With the cost of installing the signals and other related work, the city expects to pay around $69.96 million for the 11 intersections. Prices can vary by the size of the intersection and by the needs for right of way acquisition.

Fort Worth City Council Member Cary Moon said the city will continue to look at options for improving roadways and intersections.

“What residents can take away is that a lot of road improvements are coming,” he said. “We have hundreds of millions of dollars secured for road improvements in our area. Road design is in the final stages, and the city is working to get these roads built.”