As part of the $3.5 million investment, this cracked sidewalk on Lorine Street is scheduled to be fixed in 2022. (Bailey Lewis/Community Impact Newspaper)

In its mission to become Texas’ most family-friendly city, the Keller City Council will spend $3.5 million in fiscal year 2021-22 to fix sidewalks across the city.

But the decision to invest so much money to address one of Keller residents’ biggest complaints had humble beginnings, Keller budgets show.

The investment has grown in part because the city’s leaders listened to their constituents, Keller Mayor Armin Mizani said.

“We view the sidewalk repair program as a way for us to not only fulfill that mission of becoming the most family-friendly city [in Texas], but also in addressing one of the top resident concerns that we’ve heard over the years,” Mizani said.
RELATED STORIES

• Four transportation updates for Keller, northeast Fort Worth in October 2021

When Sean Hicks, Keller mayor pro tem and City Council member, was first elected in 2016 and reviewed the budget, he said he was “shocked” to learn how little the city put toward sidewalks.

“At that rate, it was going to take us 116 years to take care of the backlog of sidewalk issues,” Hicks said. “I started lobbying staff and my fellow council members to increase this budget.”

But the council decided to up the ante this year and focus on “bringing government back to its core functions,” Mizani said. The city is spending about three times more on sidewalk maintenance this fiscal year than it spent from FY 2016-17 through FY 2020-21 combined.

Not only that, but the city was years behind on sidewalk repairs. So when the City Council met in March for a budget workshop, Mizani said funding for sidewalk repairs was “one of the top items” discussed.

Despite the high price tag for sidewalk repairs, the council was still able to pull off lowering the tax rate for this fiscal year. Mizani said this is because they had “a rainy day fund” well above what they thought, so they tapped into it.

“That’s how we came to that $3.5 million investment,” Mizani said. “It was a high-priority item for the council based on citizen feedback and wanting to clear the six-year backlog situation that we had.”

Each volunteer was assigned an area near where they lived. Their job was to evaluate and take photos of damaged sidewalks and upload them to an app created just for the program, Liñán said. The public works department updated the volunteers weekly until the program concluded in December 2020.

Kerri Dorsett, a Keller resident who volunteered with the program, said while most sidewalks she saw had minimal damage, some areas saw unevenness, dissolving and cracking—all of which can be dangerous.

“I have friends who, when I told them what we were doing, they said, ‘Oh, that’s great because I was out walking my dog, and I tripped and I fell,’” Dorsett said. “So, especially for our older citizens, that can make a big difference.”

Adam Dougherty, a Keller Parks and Recreation board member, also volunteered as a Sidewalk Scout. Dougherty said he saw a lot of concrete shifting, resulting in areas that were not level and could be dangerous for older adults and kids.

“If you’re trucking along with your kids, your grandkids, or you’re hiking or biking or walking when it’s early in the morning or late at night, [someone] could take a dive and hurt themselves,” Dougherty said.

Repairs identified by Sidewalk Scouts were entered into a database under one of three categories: immediate, structural or cosmetic need. Only the non-cosmetic issues will be addressed.

The identified problems are prioritized based on the effect to residents, “with large cracks or heaving taking precedence over chipping or aesthetic concerns as well as proximity to schools, parks and other high-pedestrian activity centers,” the city wrote in a Sept. 14 Facebook post.

“So, right now, what we are prioritizing is the entire backlog of known needs that are not aesthetic,” Liñán said.

With $3.5 million going toward 3,000 sidewalk repairs, Mizani said the goal is to complete the work by the fiscal year’s end.

After months of hard work, Dorsett and Dougherty say they are thrilled that the city is putting so much money toward sidewalk repairs they helped compile.

“It’s nice living in a city that’s putting its money back into its infrastructure and not just ignoring what’s going on,” Dougherty said.

But the repairs only scratch the surface of the city’s sidewalk plans for the future. According to the FY 2021-22 budget, the city plans to contribute $250,000 annually for new repair requests.

A review of the city’s sidewalk locations map shows an apparent disconnect between the number of sidewalks in north and south Keller. Liñán said this is because the city’s development plan was to create “a more suburban” development south of FM 1709.

Liñán said because of this, there is “more of a dense network” of sidewalks in south Keller.

“That’s not to say [north Keller is] not going to get sidewalks,” Liñán said. “That’s part of the discussion.”

“Our goal of being the most family-friendly city in Keller means we have to have a connected city,” Hicks said. “Sidewalks are needed to get to schools safely, and our residents like to walk regularly.” 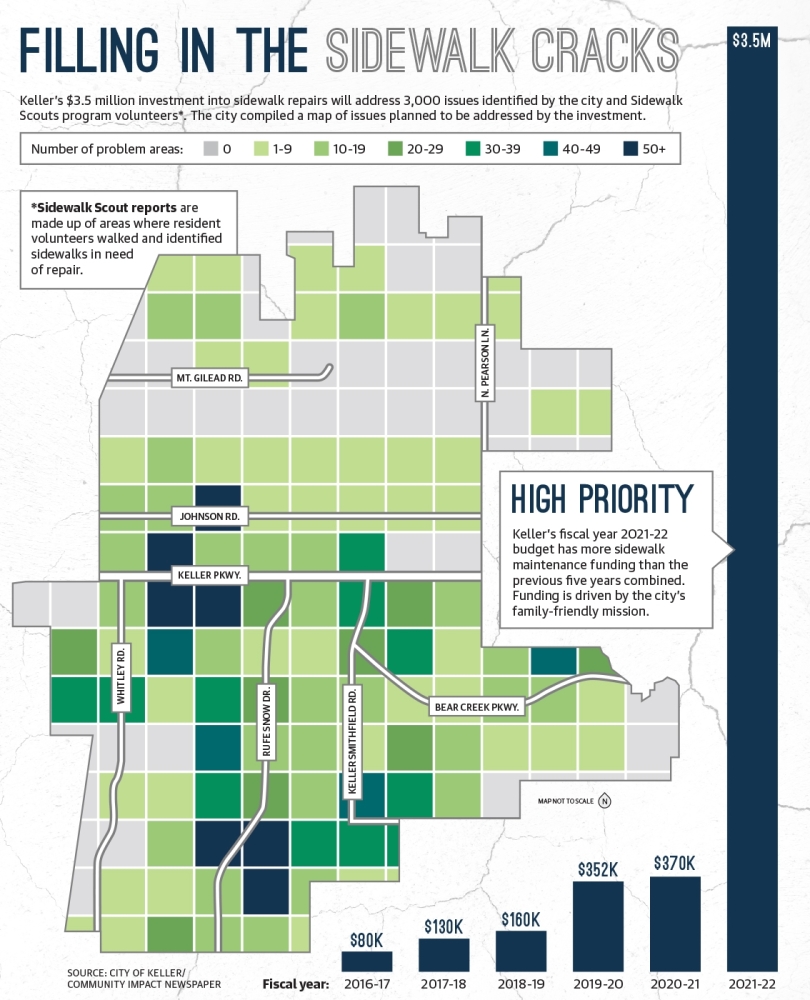 Bailey Lewis covers the cities of Grapevine, Colleyville and Southlake, as well as Keller, Roanoke and northeast Fort Worth. In December 2020, she graduated from the University of Oklahoma with her Bachelor's degree in journalism. Previously, she worked and interned for various publications, such as Local Profile, the OU Daily, the Malheur Enterprise and News21. When she's not writing, she enjoys spending time with her cat and watching documentaries.

Golden Nails & Spa opened at 5333 Golden Triangle Blvd. in Fort Worth on Dec. 1.

Spec’s Wine, Spirits & Finer Foods will open in Keller by end of 2021

A spokesperson said Spec’s Wine, Spirits & Finer Foods in Keller will now open around the end of December.