The average operating budget between Keller, Roanoke and Fort Worth will decrease by nearly 0.5% in fiscal year 2021, which began Oct.1. (Design by Ellen Jackson/Community Impact Newspaper)

Like many businesses and families in the area, officials with the cities of Fort Worth, Keller and Roanoke have sought solutions to decrease spending amid financial uncertainty as a result of the coronavirus pandemic. 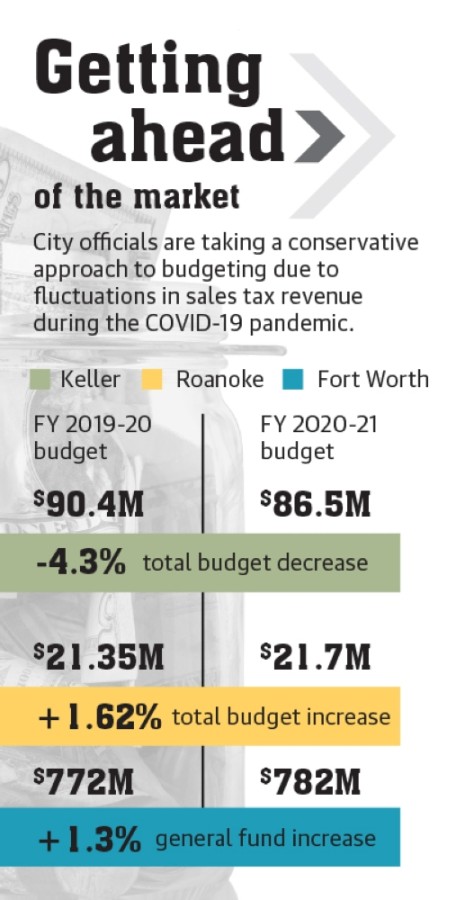 In fiscal year 2020-21, which began Oct. 1 and lasts through September, the average operating budgets for each of the three cities will decrease by nearly 0.5% from FY 2019-20. The city of Keller will see the largest year-over-year difference, at -4.3%.

As a result of a 12%-14% increase in the homestead exemption, the estimated property tax paid by Keller homeowners will decrease for the seventh year in a row, Hafner said.

The city has also “dialed back” a number of projects that would have added more than $2 million in expenses to the budget, Keller Finance Director Aaron Rector said. In order to create more of a “cushion” on the financial side of things, the city has shifted from its policy of funding entire projects in their first year. Projects are now being funded one year at a time, which also allows Keller Public Works additional time to fit the project within its schedule, Rector said.
RELATED STORIES

“City Council wanted to continue the same level of services and continue lowering the tax [payment] by increasing the homestead exemption,” he said.

Roanoke officials are taking a similar approach by aiming to mitigate tax impact on residents while still maintaining an adequate level of city services, Roanoke Finance Director Vicki Rodriguez said. The city’s operating budget will increase 1.62% in FY 2020-21, and the property tax rate for Roanoke residents will remain unchanged for the 24th year in a row, Rodriguez said. The city is also working with residents to waive late fees on utility bills, she said.

“Staff worked diligently to provide a conservative budget without cutting any services to our citizens,” Rodriguez said. “Departments were asked to maintain a flat budget or make cuts where they deemed appropriate.”

Along with instituting a hiring freeze in March—which remains in place—Roanoke cut two new full-time positions from its FY 2020-21 budget and reorganized departments to cover those positions, Rodriguez said. However, no cuts to city services were made, she said.

According to City Manager David Cooke, among other cost-saving measures, the city has instituted a hiring freeze and will not provide pay increases to general employees. The city has also moved to reduce its workforce by 120 positions.

In order to maintain adequate city services, Fort Worth will invest more than $390 million in general projects at city airports and convention centers as well as in water and stormwater improvements, Cooke said.

The city will also invest more than $48 million in street, traffic light and sidewalk maintenance to improve city transit access.

“We are spending $300 million-$400 million in capital every year,” Cooke said. “That’s a significant amount of money. The positive piece is we’re keeping our emphasis on infrastructure investment and the maintenance of that infrastructure.”

“I really appreciate the community engagement that went into the budget this year,” said Ann Zadeh, Fort Worth City Council member for District 9. “There was an incredible amount of outreach and opportunity for residents ... to let us know what their priorities were.”

The city of Keller has saved some funds by shifting some city services to the private sector. Additionally, since 2009, the city has reduced its full-time staff from 369 employees to 342 employees, Hafner said.

Furthermore, the city of Keller has partnered with Roanoke, Westlake and other entities to share the expense of some city services, such as policing and a new regional animal control position.

“We’d rather live within our means, watch cash flow and plan well,” Hafner said. “City Council and citizens understand the value of paying as you go with cash balances as long as we’re providing tax mitigation.”

The city has also restructured debt payments to save an additional $800,000, according to Rector. In addition, much as has Roanoke, Keller has defied sales tax revenue expectations throughout the pandemic.

“A lot of efforts were temporary while we figured out how COVID-19 would impact us, but we’ve actually fared better than a lot of surrounding cities,” Rector said. “It shows the importance of buying local: Even if you’re buying online and having it sent to your house, that has a positive impact.” 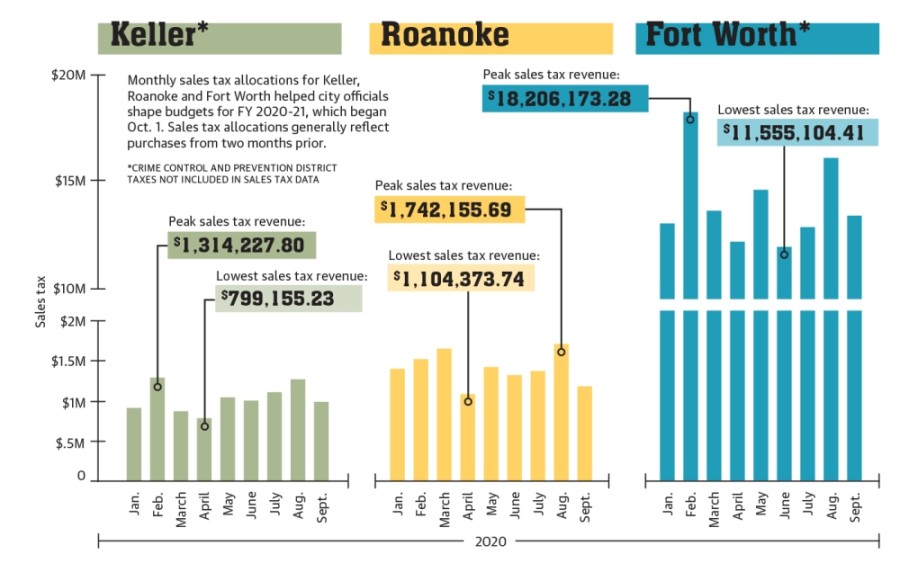