Books available to students in libraries on Keller ISD campuses have become a topic of much discussion in the community. (Courtesy Adobe Stock)

Dozens signed up to speak during a lengthy, and at times contentious, meeting of the Keller ISD board of trustees Nov. 15. The prevailing topic was books—particularly the appropriateness and possibly pornographic content of some books available in campus libraries.

Several books were mentioned as being of concern, but ”Gender Queer: A Memoir,” by Maia Kobabe was referenced most. The book is a graphic novel about the author’s own journey of gender identity and sexual orientation. Several parents cited illustrations in the book that depict sexual acts. According to multiple trustees who spoke at the Nov. 15 meeting, the book was removed from circulation the same day that parents contacted the district.

KISD is not the only district dealing with controversy regarding library books. Gov. Greg Abbott has called on the Texas Education Agency to investigate the presence of obscene materials in schools statewide.

A district spokesperson confirmed on Dec. 10 that Keller ISD is being investigated by the TEA. The investigation involves whether the district failed to “properly review and monitor the procurement of library volumes,” according to the spokesperson, who added that the district intends to fully cooperate.

The ordeal has brought to the fore policies in place to handle both the procurement of learning materials and the process for objection to those materials, said Lori Burton, a spokesperson for Education Service Center Region 11. The center is a service organization under the umbrella of the TEA, and the region includes Keller and Northwest ISDs.

“When we do have librarians reach out to us, saying ‘I’m not sure how to handle a certain situation,’ the No. 1 recommendation we give them is to look to your board policy,” Burton said. “A lot of times, parents will reach out to [ESC 11] thinking that they’re going above their districts’ head ... and what we try to do is direct them back to the district and say, ‘Your district has a policy in place for dealing with this topic or this issue—follow the process.’ Because that is your best bet in finding resolution.”

Two specific policies Burton cited are EF (Legal) and EF (Local), both of which are under Section E of board policy, which focuses on instruction. She said most districts have adopted similar versions of these policies related to instructional resources. KISD has posted its versions online.

KISD’s first policy covers a number of topics, including parent access to materials, the removal of library materials and the First Amendment implications involved. It specifically cites the Board of Education v. Pico, a 1982 Supreme Court decision, in establishing that the district cannot remove materials on shelves for having ideas with which it disagrees.

But it can remove materials based upon pervasively vulgar content or the educational suitability of the item. Its version of the second policy covers instructional resources, their purpose, criteria for their selection and what happens if materials acquired prove to be controversial—including the formal challenge process.

One of the questions raised at the Nov. 15 meeting was how books that might broadly be considered inappropriate by the community would end up on a campus library shelf in the first place.

John Allison, KISD’s associate superintendent of education, explained the process during a presentation to trustees at the meeting.

He said campus libraries at high schools, for instance, can have anywhere between 10,000 and 19,000 items. Some items may have been procured years before a school’s current librarian was hired, he said.

Other purchases are often made in bundles from publishers and based on awards lists, among other criteria. For instance, “Gender Queer: A Memoir” was named a 2020 Alex Award winner by the American Library Association.

“[Librarians] look for two peer-reviewed journal articles around that book or bundle, and then they look at what the recommendation is for the age-appropriateness for the students,” Allison said. “And that’s been the process that Keller—and I would say most school districts—have followed in the past.” 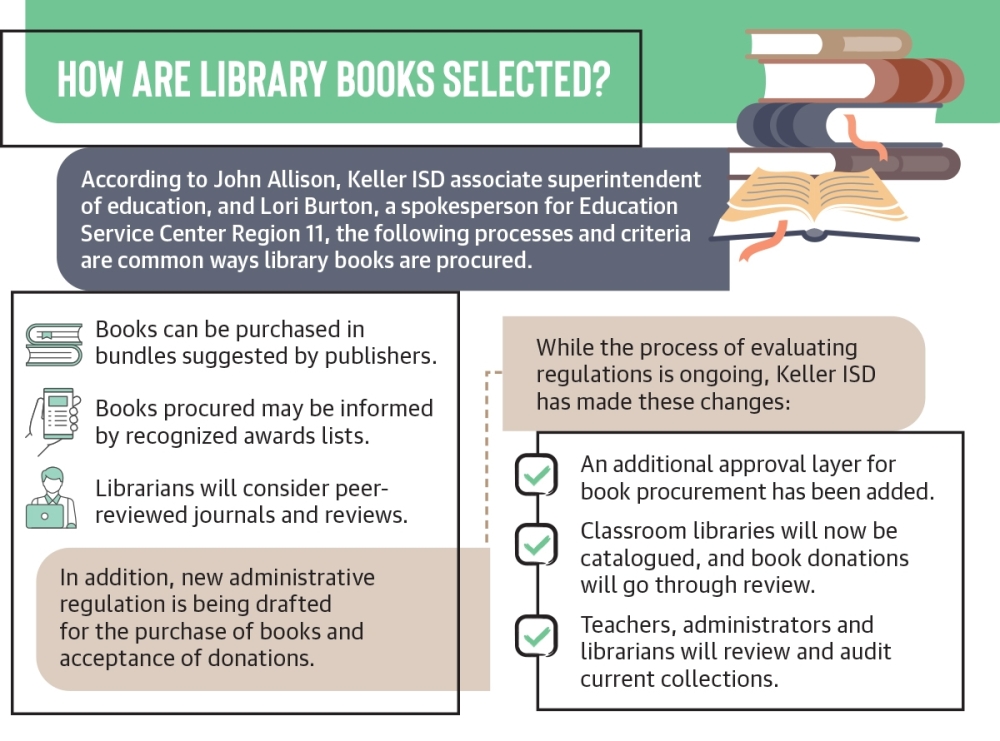 Allison went on to explain that, in light of the current situation, the district is re-evaluating its process for procurement and intends to add more layers of review. It has also implemented a pause of sorts on ordering books and materials aimed at adults and young adults.

In an Oct. 29 email to district staff and families, KISD Superintendent Rick Westfall outlined some preliminary changes leadership is considering. Those include the additional layer of approval as well as the announcement that classroom libraries will now be catalogued and all donated books will now undergo the same review process as those procured by staff.

In a Dec. 10 email to Community Impact Newspaper, a district spokesperson noted “the review and refinement of the procurement process is ongoing.”

As part of the review, KISD librarians are auditing their collections, Allison said. He said the district was looking at options for its library checkout system that would “give parents more control over the materials that their student would check out.”

On Nov. 12, Westfall sent another email to families and staff, inviting the community to follow along during the process underway via a new Instructional Resources site online at www.kellerisd.net. The page includes resources and outlines options and processes available to parents, including the challenge process.

The KISD website has a page listing books under review and their status. As of the end of the day Dec. 12, 29 books were listed on the page—six had been removed from circulation and several others were pending review.

At the Nov. 15 meeting, Westfall took responsibility for the situation and the district’s response.