Deloitte University in Westlake is moving ahead with an estimated $300 million expansion plan after receiving a 10-year property tax abatement from Tarrant County.

The leadership development and innovation center that includes an 800-room corporate hotel provides training not only for Deloitte employees but also for leaders from around the world who serve in the public and private sector.

Company officials said at a county presentation in June that the Westlake campus, known as Deloitte University: The Leadership Center, attracts 65,000-70,000 people a year for training and needs more room to grow.

They project that in fiscal year 2023 the Westlake campus will log about 79,000 visitors and deliver more than 100 tours and 300 programs.

“Over its 10-year life, DU has hosted former U.S. presidents, former first ladies, Olympians, global corporate leaders and board members along with numerous other world dignitaries,” according to its tax abatement application with Tarrant County.

Deloitte is a professional services firm that employs more than 400,000 people across 150 countries and territories, according to its website.

Last year, the company purchased several plots of land adjacent to its campus located south of SH 114 and east of SH 170 in Westlake, property records show. Deloitte University officials have said they are working on a master plan, but the initial proposal submitted to the county included eight new structures spread across what is now a 225-acre site.

“We certainly appreciate the great corporate citizen that Deloitte has been in our area,” Precinct 3 County Commissioner Gary Fickes said at a July 26 meeting. “They’ve got a fabulous facility for training. It’s a beautiful setting.”

Improvements would include guest rooms comparable to a 4-star quality hotel, an entertainment venue and state-of-the-art conference, innovation and learning facilities, according to Deloitte’s application for the county tax abatement. Improvements would also include onsite dining options, coffee/wine bars, fitness centers and outdoor learning and amenities, the application stated.

The tax abatement unanimously approved by Tarrant County Commissioners Court on July 26 grants a 55% tax abatement over 10 years provided the company meets certain terms. The new facilities would have to be a minimum of 300,000 square feet, according to the agreement.

“Deloitte will also be required to meet a minimum combined capital investment of $300 million, which includes no less than $270 million of real property and an estimated $30 million on personal property,” Maegan South, Tarrant County’s economic development manager, told commissioners.

That is an increase from the more than $100 million figure discussed at the commissioners’ June meeting.

Deloitte’s application stated its plans would be done over multiple phases, “maximizing the remaining entitled 1.5 million square feet (approximate)” on its Westlake acreage.

New facilities would be completed by Jan. 1, 2029, according to the tax abatement agreement.

Deloitte would be eligible for an additional 20% county tax abatement each year if it meets terms related to full-time employment and Tarrant County resident employment, according to documents.

Using the current property tax rate and maximum abatement of 75% over 10 years, county officials estimate that the expansion project could receive a total tax abatement of about $5.1 million.

The remaining improvements not part of the abatement would generate about $1.7 million in tax revenue for the county during that 10-year period, according to a county memo.

The Tarrant County Hospital District, which is not part of the tax abatement agreement, would receive about $6 million in property tax revenues from Deloitte University’s proposed improvements over 10 years, according to the county.

The Westlake agreement also includes breaks on sales tax and hotel occupancy tax owed to the city. Deloitte would also receive a 50% discount on permit fees from the town, according to the agreement.

Appraisal records show the taxable value of the existing Deloitte University campus at more than $131 million. The campus consists of a 700,000-square-foot facility with a 10,000-square-foot entertainment venue, county documents show. Ten-year tax abatements with Westlake and Tarrant County that are tied to those original facilities expire this year, meaning the company will pay property taxes on that full value in the future.

In the coming years, Deloitte aims to achieve the highest certifications from the U.S. Green Building Council for its sustainability efforts, according to its county application. The goal is to reduce carbon emissions from the buildings it owns and support a commitment to reduce and achieve net-zero carbon emissions by 2030, the application stated.

“Prior to the COVID-19 pandemic, the DU facility was operating at capacity, and we recently reached pre-pandemic levels again,” Deloitte’s county application stated. “For these reasons, Deloitte is considering a proposed expansion where construction costs are estimated to be in excess of $100M. ... This proposed abatement would offset some of these extraordinary costs.”

Construction on the first phase is scheduled to begin in 2023.

Deloitte filed plans on July 27 with the Texas Department of Licensing and Regulation to begin $10 million in renovations and upgrades of more than 24,500 square feet of existing facilities on Jan. 1, 2023.

According to Deloitte’s application for the tax abatement, “The [expansion] project will also provide significant ripple effects to the local economy with increased construction jobs, increased retail revenue from contractors and visitors and increased local professional jobs supporting the expansion project.” 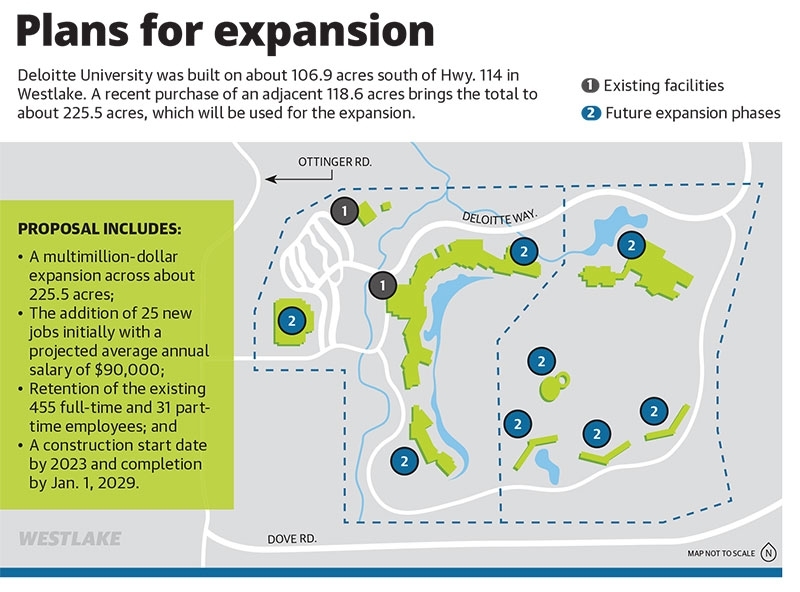