A possible concept for a Staybridge Suites extended-stay hotel has been proposed at 415 Lois St., Roanoke. (Rendering courtesy Navid Karedia)

contribute today
Plans are beginning to take shape for an extended-stay hotel concept near Hwy. 114 and Lois Street in Roanoke.

Developer Integrity Group received approval from the city of Roanoke Zoning Board of Adjustments on Feb. 20 for two out of three requested variances for the design of the hotel.

The board approved requests from Integrity to increase the number of floors of the hotel from three to four and to decrease the landscaping buffer from 25 feet to 15 feet on the portion of the development adjacent to Hwy. 114.

“Staff doesn’t have any opposition to the variance request for an additional floor due to the location of the water tower directly next to it,” said J.R. Hames, planning manager for the city of Roanoke. “The water tower always seemed problematic ... and more recently council approved an ordinance that redefined hotel use to limited-use and full-service hotels.”

According to Hames, limited and full-service hotels are already permitted to build additional floors in the city’s retail service district. Hames noted that the proposed Staybridge Suites currently meets the majority of the city’s criteria.
RELATED STORIES

• INTERACTIVE: Find out what Keller, Roanoke and northeast Fort Worth restaurants are doing to remain open throughout the coronavirus outbreak

• Latest on coronavirus: Updates for Keller, Roanoke and northeast Fort Worth

The board also approved an adjustment to the development’s landscape buffer along Hwy. 114, due to a 25-foot Texas Department of Transportation buffer already in place at the Hwy. 114 and Lois intersection, Hames said.

A third variance request from Integrity to forego a 6-foot retaining wall on the north side of the development by constructing a 4-foot iron fence alternative was not approved.

“I definitely want the big wall,” Roanoke resident Billy Bowen said. “I’d rather have a big retaining wall that keeps it private from us.”

Hames noted that Integrity still has the option of presenting the alternative design with an iron fence to council at a later date.
Roanoke Business Roanoke government Staybridge Suites Integrity Group JR Hames
SHARE THIS STORY 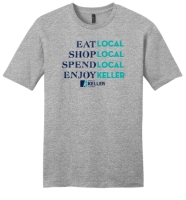 The Keller chamber has partnered with a local screen printing store to sponsor a t-shirt fundraiser.

Keller ISD is offering a weekly reading series for parents and students.

The Classic Cafe was forced to go from white-tablecloth fine dining to curbside pickup and delivery within three days.

City of Fort Worth bracing for financial losses from COVID-19

Fort Worth officials estimate sales tax revenue may fall short by up to $26 million.

Hey Sugar in Roanoke has been able to find success through new services, at-home offerings and by staying active on social media.