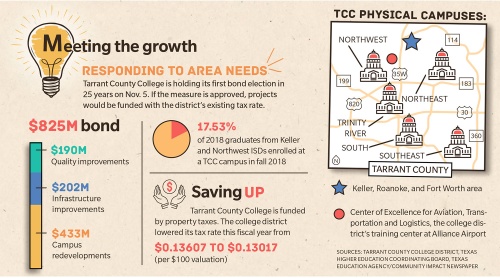 Tarrant County College is holding its first bond election in 25 years on Nov. 5. If the measure is approved, projects would be funded with the districtu2019s existing tax rate.

In November, voters will consider an $825 million bond measure for Tarrant County College that will bring renovations and improvements to each of the college’s five campuses and its online school.

This is the first bond election the college has called in 25 years, and at $825 million, this is the largest bond package the college district has ever held, officials said.

If voters give the bond the green light, the money would address aging facilities at the Northwest Campus in Fort Worth and the Southeast Campus in Arlington. It would also add technology enhancements and other renovations at all five of the college’s physical campuses, officials said.

“What the college has done since 1992-93 is just regular maintenance,” TCC Chancellor Eugene Giovannini said. “After a while, that builds up.”

Tarrant County College expects to repay the bonds without any increase in the property tax rate, Giovannini said.

“We currently do not have any outstanding debt on prior projects, and in the recent past, all of our capital investments have been pay-as-you-go,” Chief Operating Officer Susan Alanis said in an email.

To pay for the debt from the bond program, the college plans to adjust its cash funding and use some extra resources in its operating budget. The extra resources come from a growing tax base, Alanis said.

The college district has decreased its property tax rate over the last three years, including this year, Giovannini said. In August, the trustees adopted a $0.13017 tax rate per $100 valuation. A home of average value in Tarrant County would generate $285 annually for the college district.

The bond allows the college to get the money for these projects at a lower rate, said Conrad Heede, board president of Tarrant County College District.

In addition to offering two-year degree programs, the college partners on dual-credit classes with the local school districts, including both Keller and Northwest ISDs.

Tarrant County Precinct 3 Commissioner Gary Fickes, whose precinct includes Keller and Northeast Fort Worth, said the bond improvements would ripple across the county.

“Tarrant County College is such a positive entity in the county as a whole,” he said. “They do such a great job, working with our schools, working with our businesses, providing education for employees and on-the-job training.”

Tarrant County College was founded in 1965. Its first campus, the South Campus in Fort Worth, expected 800 students, Giovannini said. Instead, more than 4,200 students showed up that first semester. Since then, the college has expanded to five physical campuses and one online campus. Enrollment this past school year was 99,518 students.

Since Tarrant County College’s last bond election, its annual enrollment has increased by more than 45,000 students, according to the district’s website.

The college was created to serve the community, Giovannini said.

“We are not successful unless we respond to [community changes],” he said. “Over the last 50-some years, the college has done a wonderful job of keeping pace with the community and continuing to meet this community’s needs. We’re in a critical time now in terms of this area and its growth and its opportunity.”

When voters approved the college’s fourth bond election in 1992, it was to fund construction of the then-new Southeast Campus in Arlington. The campus was designed to hold 5,000 students. However, it now has close to 12,000 students, Heede said.

The Southeast Campus is second in physical enrollment only to the Northeast Campus in Hurst, which has close to 13,000 students, according to the district’s website.

“The college benefits from a fast-growing region that is increasing the tax base—however, that also means a larger population and business community to serve,” Alanis said in her email.

The college plans to use the money from the bond program for projects that will be spread out over the next 10-15 years, Heede said.

While most people think of brick-and-mortar changes with bond programs, this one will also pay for safety and security measures, such as improving doors and entryways, said Reginald Gates, vice chancellor of communications and external affairs. The bond money will also be used to enhance the overall student experience.

“We’re going to do things to make the campus feel more like a place you want to stay,” Gates said.

Wayfinding signage will be added to each campus to help the college build its brand on being accessible to the community, he said.

Bigger projects will include renovations at the Southeast Campus and Northwest Campus, which will have new buildings added to them to address overcrowding and structural concerns, Heede said.

“It’s critical,” Heede said of the bond package. “We have all of these things that have been building up. We kept pretty good care of our buildings, but with those major construction items, we just thought this was the proper time to call for a bond program that will get us the money in-house now.”

If the bond proposition fails to garner voter approval Nov. 5, the district will have to evaluate its most-needed priorities and continue on a smaller scale, Alanis said.

Should the bond be approved, the design process for the first phase of construction will begin this year and stretch into 2020, according to information on the district’s website. Classroom renovations at Tarrant County College’s Northeast Campus are expected to begin in late 2020 and wrap up in 2022.

Major renovations at the Northwest and Southeast campuses will not begin with design work until closer to 2021.

The college will also hire a third-party project management group to oversee the bond projects.

“It really does provide a great service as this metroplex continues and continues to grow,” she said. “It also makes it very affordable for kids that might not have an option to go somewhere to be able to get a great education.”