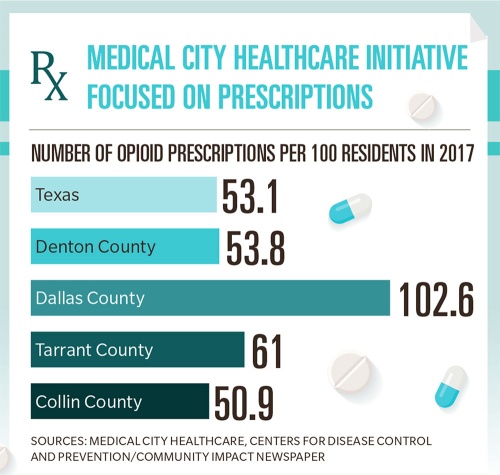 Dr. Holly Baselle, medical director of emergency services at Medical City Alliance, said the initiative is a local response to the growing opioid epidemic, which the Centers for Disease Control and Prevention has classified as a national health crisis.

“The opioid epidemic has really become a major issue in the U.S.—130 people are dying daily from it,” Baselle said. “It’s got a big impact on our community, too. Not only do you then have 130 people a day that are fatally overdosing because of this, you have their family members, their children, their communities that are all suffering from it, too.”

Hospitals across the state—including those in the Medical City and Texas Health systems—are addressing the opioid epidemic through similar initiatives, said Karen Kendrick, vice president of clinical initiatives and quality at the Texas Hospital Association.

The opioid epidemic, Baselle said, is not just a national problem, but a local one, too.

“This isn’t a crisis that has a preference,” Medical City Lewisville CEO LaSharndra Barbarin said. “It doesn’t have a certain economic status. It doesn’t differentiate by race, gender or education. It really is a crisis that is prevalent throughout all of the areas in North Texas.”

Baselle said doctors across both the Medical City Healthcare system and the state have started to use a prescription monitoring system available to physicians through the Texas Department of State Health Services. The database allows physicians to identify patients who may be at risk for potential overdose.

“It allows caregivers to see the controlled substance history of patients and identify those with opioid use disorder,” Dr. Glenn Hardesty, an emergency physician who is in charge of the Texas Health system’s efforts to reduce opioids, said in a written statement.

“It’s part of our responsibility to help control how many of these medications are being prescribed or are available in medicine cabinets and homes and on the street,” Baselle said.

The idea, Barbarin said, is that patients will be able to take pain medicine less frequently by keeping their minds on something else.

Drug take-back boxes were installed in 12 Medical City hospitals in September, including one at Medical City Alliance, to provide individuals with locations to safely and anonymously drop off prescription opioids and other unwanted or expired medications.

Barbarin said it is important to use safe medication disposal methods such as this one because flushing medication down a toilet or a drain can create potential health and environmental hazards. Throwing medication in the trash can inadvertently make it accessible to people who are already addicted to prescription drugs, she added.

Daniel Houston contributed to this report.