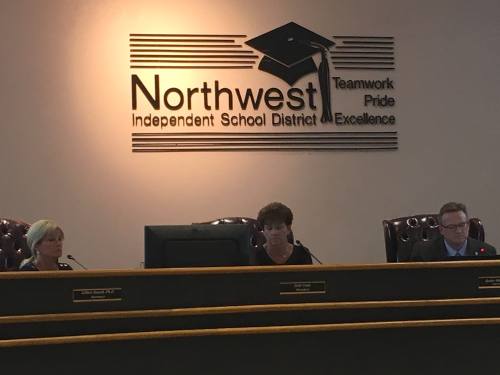 The Northwest ISD school board met Oct. 21 and approved a guaranteed maximum price of about $17.7 million for Phase 2 of the project that comprises work at Chisholm Trail, Medlin and Gene Pike middle schools.

All three schools were included in the $399 million bond package with work planned for fine arts facility additions and renovations, as well as building repairs, mechanical system upgrades, handicap accessibility improvements and other work.

Phase 1 included upgraded fire alarm systems at Pike and Medlin, which were completed over the summer, according to a meeting presentation.

This guaranteed maximum price is over the expected budget, but the increase in the estimated construction cost stems from a new requirement for a storm shelter that the district did not anticipate, said Tim McClure, the district's assistant superintendent for facilities.

The town of Trophy Club recently adopted and interpreted an international building code that requires NISD to provide a storm shelter at Medlin, which was not previously required at that campus—or any others, McClure said. The additional $1.8 million will come from the share of the bond allocated for land acquisitions.

The school board also approved a guaranteed maximum price of nearly $19.8 million for the combined bond project of improving Eaton High School and Tidwell and Wilson middle schools.

The bulk of the $19.8 million will go to building classroom additions at Eaton, while smaller renovative work will take place at the two middle schools, McClure said. This is below the cost estimate for this phase of work, placing it within budget, according to meeting documents.