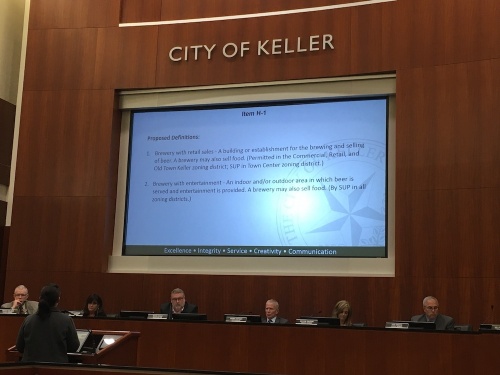 Keller City Council, at its Oct. 15 meeting, approved an ordinance that would amend the city’s unified development code and allow breweries in certain parts of the city.

This amendment was a request from both the Keller Planning and Zoning Commission and City Council following a similar change to allow for wineries earlier this year, Keller Administrative Services Manager Sarah Hensley said in an email.

Over the years, breweries have become increasingly popular in Texas, which had the third-highest economic impact in 2018 with $5.3 billion contributed to the U.S. economy, according to a study by the Brewers Association. The industry also provided more than 550,000 jobs across the country.

One potential benefit to this code amendment is that it could help the city’s economy by boosting its sales tax revenue, City Planner Katasha Smithers said.

The city received no responses either for or against this amendment. The terms and requirements may differ for brewers, depending on where they want to establish their breweries.

With this ordinance, a brewery offering food and retail sales is allowed in the commercial, retail and Old Town Keller zoning districts, according to a staff presentation at the meeting. But that same brewery would require a specific-use permit—obtained with City Council approval—in the town center zoning district.

Meanwhile, any brewery that intends to feature entertainment in any of these districts would require a specific-use permit, according to the staff presentation.

A public hearing was held for this ordinance. No one spoke, and it passed with a 5-0 vote. Mayor Pat McGrail and Council Member Chris Whatley were absent.