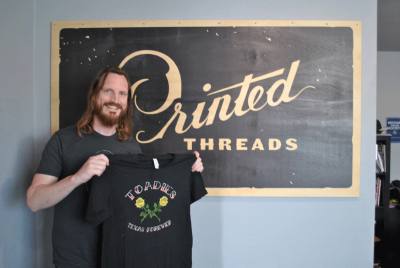 A passion for music led Brett Bowden to the screen-printing business when he was in high school.

As a musician, Bowden noticed the rock bands he performed with made money from T-shirt sales. Wanting to learn how to produce the shirts himself, he attended training, bought a press and started printing garments in his garage.

But Bowden’s operations were cut short in the early 2000s when he sold his press and went on tour with his band. He did not revisit screen printing until 2009 after he had attended college and was struggling to find a job as a teacher during the nation’s economic slump.

Remembering his high school venture, Bowden took a risk and in 2010 bought another press, again producing shirts out of his garage. Bowden approached old friends and musicians to build his clientele.

Within six months, Bowden’s new company, Printed Threads, had grown too large to operate out of his garage. He moved the business to its current space on Katy Road in Keller, where it employs 30 workers and produces between 2,000 and 10,000 T-shirts per day. Printed Threads can take a garment from the design stage through production and offers pickup and shipping.

Customers can place orders of various sizes, ranging from a single shirt to 100,000 garments. Prices typically range between $5 and $10 per shirt.

While musicians are still a major part of Printed Threads’ client base, the company has expanded its business to span “bands, brands, bars and churches,” including Tumbleweed Textiles and Flying Saucer restaurants, Bowden said.

Leonard Firestone was sworn in as councilmember for District 7, which includes parts of Northeast Fort Worth.

Every six years, the city of Roanoke is required to review its home rule charter. A commission is being put together to begin the process.

Online sales, home improvement and increased restaurant activity have driven the growth, according to the city.

The restaurant serves a menu similar to The Tavern, another of Felipe Armenta's restaurants.