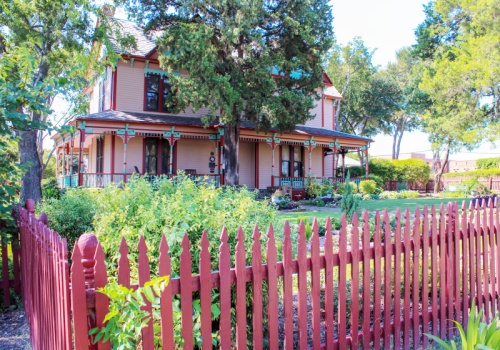 The Farrell-Wilson house, built in the 1890s, is the centerpiece and prime attraction of the Heritage Farmstead Museum in Plano.nPhotos by Daniel Houston/Community Impact Newspaper

Known today for the historical museum of Texas prairie life that operates on its premises, Heritage Farmstead—and its original Victorian-style residence—offer a unique insight into life in 19th-century Plano.

In many ways, the property is still set up to resemble an old Texas farm. Fourteen of its original structures are still standing. Chickens, donkeys and other animals are cared for on-site and in full view of the various walking paths on the property.

But the museum’s prize possession—the 1890s home facing 15th Street that is referred to as the Farrell-Wilson house—is home to its main exhibits, which detail life on the blackland prairie, said Kathy Wilson, the museum’s director of marketing and development.

The museum has partnered with Plano-area schools for many years to provide an up-close learning experience for children.

“For 25 years, we told every third-grader the story of the blackland prairie,” Wilson said. “They studied it in the classroom, and then, they came here on a field trip.”

The original property consisted of hundreds of acres of farmland and structures. When Ammie Wilson, its last living occupant, died in 1972, a developer worked to build on the majority of the property, according to Hillary Kidd and Jessica Bell in their 2013 book, “Never a Good Girl: The Renegade Spirit of the Farrell-Wilson Family.”

The roughly 4-acre area on which the museum operates today was preserved after sustained efforts in the 1970s and 1980s by a group of residents called the Plano Heritage Association, which formed to protect the property’s historic core from development and turn it into a farmstead museum, Kidd and Bell wrote.

The exhibits and original structures on the site are updated throughout the year. They offer a rare and often-changing glimpse into life in North Texas in the late 19th and early 20th centuries, Wilson said.

“It’s such a treasure,” Wilson said, “and so many people don’t even know we’re here.”