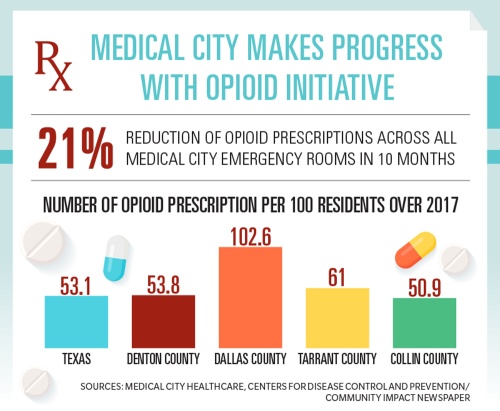 Medical City Lewisville CEO LaSharndra Barbarin said the initiative is a local response to the growing opioid epidemic, which the Centers for Disease Control and Prevention has classified as a national health crisis.

“Just knowing that we had that significant of an impact in less than a year’s time frame speaks to not just education, but potentially lives saved and addictions prevented,” Barbarin said.

The opioid epidemic, Barbarin said, is not just a national problem, but a local one, too.

Denton County Public Health Department data shows there were 37 opioid-related deaths in the county in 2017. In addition, CDC data reveals that during that same year, there were about 54 opioid prescriptions per 100 residents in Denton County.

“This isn’t a crisis that has a preference,” Barbarin said. “It doesn’t have a certain economic status. It doesn’t differentiate by race, gender or education. It really is a crisis that is prevalent throughout all of the areas in North Texas. Denton County is no different.”

Breana Bohannan, treatment center director with AppleGate Recovery Lewisville, said she has seen first-hand how prevalent the opioid epidemic is. The center offers medically assisted treatment to those struggling with opioid addiction.

“We’re all human, and we all have healthy and unhealthy coping skills,” Bohannan said. “And no one who reaches for that alternative expects the dependency aspects of opioids, much less death.”

Barbarin said Crush the Crisis was created because everyone involved in the Medical City Healthcare system had a strong desire to do their part to mitigate the increase in  opioid addictions.

The initiative is three-pronged. The first phase, which launched last year, lessens the number of opioid medications prescribed in Medical City emergency rooms. The final two phases, which focus on reducing the use of opioids in surgical recovery and on educating the community were launched in September.

Dr. James Doyle, who practices at Medical City Lewisville, said he and his colleagues focus on treating patients with equally effective, less addictive alternatives to opioids as much as possible. Alternatives include non-opioid patches, non-opioid pain medications, local injections and other pain relief methods.

Doyle said opioids present a high risk of addiction because of how they affect the human brain.

“Opioids impact sugars in the brain,” he said. “And when they are prescribed and are given in doses that exceed the pain-level considerations, they can provide a feeling that is very euphoric, which can definitely lead to addiction.”

The idea, Barbarin said, is that patients will be able to take pain medicine less frequently during their recovery if they use the headsets to keep their minds on something other than their pain.

In a pilot study conducted by Medical City Healthcare at its hospitals, 35% of patients who used the virtual technology reported reduced pain, and more than 60% said they had less anxiety after using the technology, Barbarin said.

“We certainly recognize that anything to alleviate patients’ pain and suffering is really why we’re here—that’s at the heart of our mission,” Barbarin said.

The initiative’s third phase focuses on educating the community about the dangers of opioids and the importance of disposing of unwanted medication safely.

Drug take-back boxes were installed in 12 Medical City hospitals in September, including at Medical City Lewisville, to provide individuals with locations to safely and anonymously drop off prescription opioids and other unwanted or expired medications.

Barbarin said it is important to use safe medication disposal methods such as this one because flushing medication down a toilet or a drain can create potential health and environmental hazards. Throwing medication in the trash can inadvertently make it accessible to people who are already addicted to prescription drugs.

Bohannan said that for people already struggling with opioid addiction, a list of local treatment resources can be found on the federal government’s Substance Abuse and Mental Health Administration website.

“This is a huge epidemic to face alone,” Bohannan said. “And in the treatment community we have, we’re here to help individuals navigate into recovery.”