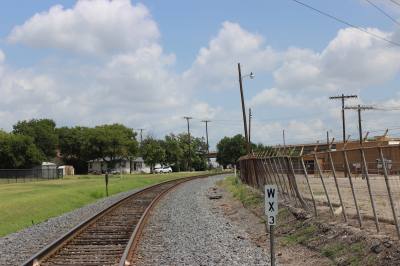 Prior to the debut of TEXRail on Jan. 10, the U.S. Department of Transportation announced a $908 million loan was awarded to the Dallas Area Rapid Transit System to connect the DART to the Dallas-Fort Worth International Airport. This system would be built along the Cotton Belt line and would supply east-west rail connecting downtown Plano to DFW Airport. TEXRail connects DFW Airport to Grapevine and several other stations on its route to Fort Worth.

The Cotton Belt Corridor Regional Rail Project is a 26-mile passenger railroad extending from DFW Airport eastward to the Plano/Richardson area, covering three counties and seven cities. The project will be constructed primarily within the existing DART-owned railroad right of way. The tracks are currently used for freight rail service.

TEXRail service brings passengers from downtown Fort Worth to the DFW Airport. When complete, the Plano DART extension will bring passengers from Plano to the airport, where they are able to connect to places such as Grapevine and Fort Worth, and vice-versa, through TEXRail.

"The funding of this project is a real win for North Texas and couldn’t come at a better time," Grapevine Mayor William D. Tate said in a statement. "The additional travelers that come as a result of this expansion will have the opportunity to take advantage of our historic downtown area and Grapevine Main station, creating a positive economic benefit that will ultimately accrue to our residents."

"The excitement over the start of TEXRail is even greater than I anticipated, and the expansion will make for even better connections, allowing our residents the ability to travel seamlessly across the DART system," Tate said.

Construction is expected to be complete in 2022.
SHARE THIS STORY

The city of Colleyville will host its annual Christmas tree lighting ceremony, which will include live reindeer, a farmers market, a drive-in movie and more, on Dec. 3.

Volunteer Guide: 11 ways to give back in Grapevine, Colleyville and Southlake

For those looking to help out in the Grapevine, Colleyville, and Southlake communities, there are several local nonprofit groups that offer volunteer opportunities and accept donations.

Panera Bread on Southlake Boulevard is now closed. A reason for the closure was not shared.