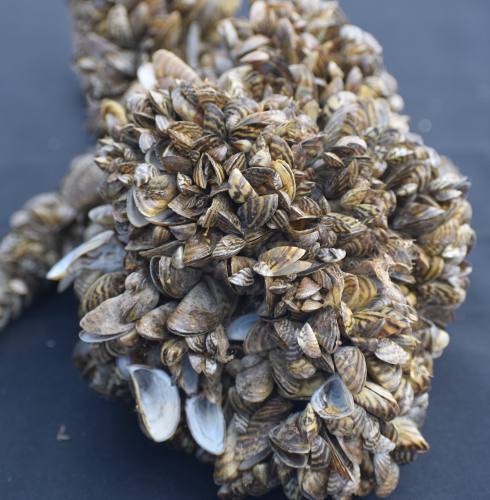 These Zebra mussels are hanging on a simple rope, with their depth attributable to their ability to attach to each other as well as other native mussels.

Local entities are encouraging boaters to take steps to ensure that an expected infestation of zebra mussels at Grapevine Lake does not interfere with water intake or cause environmental damage.

The Texas Parks and Wildlife Department in June announced a juvenile zebra mussel and microscopic larvae were found at the U.S. Army Corps of Engineers-operated lake. Zebra mussels are an invasive species that pose an ecological and economic threat, damage boats and threaten a city’s water supply by clogging pipes.

Army Corps of Engineers Manager for Grapevine Lake Kenneth Myers said the zebra mussels could cause an increase in maintenance funding for the lake in order to help prevent the spread of the species.

Zebra mussels were first discovered in Texas at Lake Texoma in 2009 and since then have spread to several surrounding lakes.

“[Lake Texoma is] where the whole infestation came from,” Brock said. “More than likely it was spread from boaters who did not clean their boats. However, we do have a lot of lakes that are connected via pipes and a lot of lakes that have downstream flows into another lake, which are all ways that zebra mussels can spread as well.”

Texas state law requires owners to drain water out of a boat before leaving the water, Brock said. He said TPWD has been working to educate the public to also clean a boat with high-pressure water and soap and let it dry for at least a week before moving to another lake that is not infested by the mussels.