Members of Southlake's City Council listen to an updated presentation from Rockwater Developments on the proposed development known as the Conservation on Dec.1. (Sandra Sadek/Community Impact Newspaper)

Council approved 7-0 a development with eight residential lots on 13.1 acres located east of SH 114 and north of Dove Road. The primarily low-density development, The Conservation, is a project from Rockwater Developments, a Roanoke-based company.

“From a simple average lot size calculation, we feel like we're compatible with the neighborhood,” said Jody Boyd, a representative for Rockwater Developments.

The properties in question, at 2970 Burney Lane and 3185 Southlake Park Drive, belong to Marylyn Miles and Errol and Leslie Housman. However, the Southlake Park Drive property is landlocked, which will require the construction of an access road and approval from the Army Corps of Engineers. Project engineer Richard DeOtto said no construction can begin before receiving approval from the Corps to construct the road.

“We have 100% certainty that we're going to be able to put the road in the configuration that we're showing you,” he said. "I can point to [roads] that are already like this."
RELATED STORIES

• Dec. 4 is last day for voters to cast early ballots in the Grapevine-Colleyville ISD runoff

The approval of the access road could take between four to six months, DeOtto said. 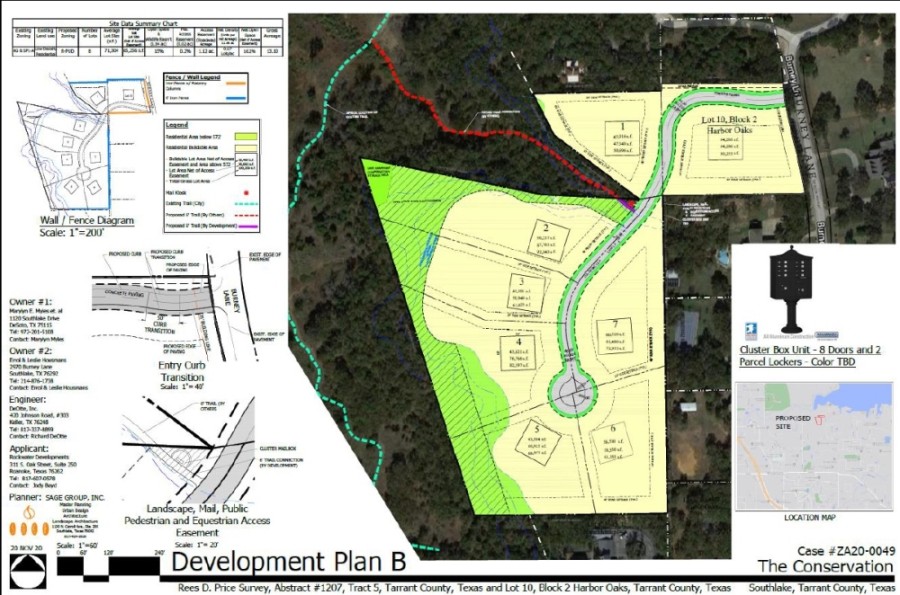 The project has gathered attention from area residents, many of whom do not approve of adding an access road in the proposed area.

Amy Newby, a Southlake resident living nearby, said residents are not opposed to developing the land but rather oppose the proposed location of the access road.

“We're just trying to put the square peg in the round hole,” Newby said. “The issue is not whether we want to develop the land. It's beautiful land. Yes, it needs to be developed, but don't come through an existing lot within our neighborhood.”

Other residential concerns include public safety, wildlife protection and tree conservation as well as a lack of compatibility with surrounding subdivisions.

“This plan butts right up to our vacant lot,” said Shawn Brown, a resident of Harbor Oaks, whose property is adjacent to the lot on Burney Lane. “It looks like a 10-foot setback to me. Now we're surrounded on three sides by road. This significantly impacts our ability to develop and impacts the value [of our property].”

Despite the opposition from neighboring households, the owners of the two properties are in favor of the development. At an Oct. 8 public hearing by the city, Miles wrote that “as a property owner, I wish to use my right to develop my property.”

Housman, owner of the Burney Lane property, said it is the right thing to do to allow the Miles family to finally develop their landlocked land.

"Eventually, the city needs to do right by them," Housman said.

Following the public hearing, Boyd said the company was willing to adjust its Plan B option and move the access road south by 40 feet to accommodate the Browns’ property on the north side of the project.