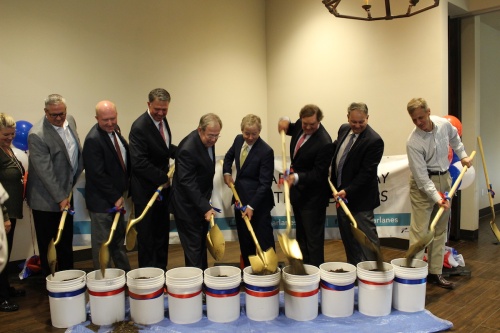 Officials with the I-635/SH 121 interchange project turn shovels for the groundbreaking.

On Aug. 13 the Texas Department of Transportation, the city of Grapevine and NorthGate Constructors hosted a groundbreaking for the I-635/SH 121 interchange project. The $370 million project is the next big piece of the DFW Connector. It will reconstruct and widen SH 121 to accommodate a new interchange at I-635 and new direct connectors at SH 26 and FM 2499.

With the groundbreaking underway, the project construction will begin in the coming weeks and is estimated to finish by 2022. The 3-mile project will widen SH 121 and increase connectivity between I-635, SH 121, SH 26 and FM 2499, adding auxiliary lanes that will move merging vehicles out of the SH 121 main lanes, according to a news release. The project will also widen direct connectors and frontage roads as well as increase capacity along Bass Pro Drive in Grapevine.

In 2016, Gov. Greg Abbott called on the Texas Transportation Commission to develop a focused initiative to address the most congested chokepoints in Texas. Bugg then met with transportation leaders and elected officials in the state’s five major metropolitan areas. Those listening tours and collaborative efforts with metropolitan planning organizations and TxDOT districts helped shape this initiative.

“This project is good news for drivers and is proof of our commitment to keep traffic moving in the region,” Bugg said in a statement. “Reducing congestion in our metro areas is an ambitious task, but we’re committed through the Texas Clear Lanes initiative to work with our state and local leaders to make a difference for drivers.”