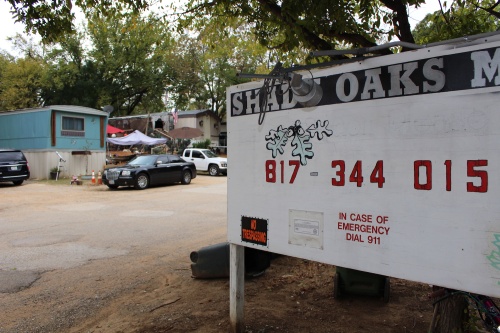 The Shady Oaks Mobile Home Park was the topic of discussion at the Oct. 15 Grapevine City Council meeting.

The city of Grapevine decided against the closure of a mobile home park that would have displaced residents from one of the city’s few remaining pockets of affordable living.

On Oct. 15 the Grapevine Planning and Zoning Commission and the Grapevine City Council denied a request to rezone the 72-lot mobile home park at 431 Scribner St., Grapevine, for an upscale apartment complex from JPI Construction. The property is currently zoned as a manufactured home district and multifamily district, and JPI requested the property be strictly a multifamily district.

JPI had plans to develop a 362-unit, gated apartment complex on the 15 acres. As part of this complex, JPI would have also developed 15 brownstone-style apartments three-stories in height. They would have resembled multistory townhomes with incorporated garages on the first floor.

The developer had partnered with the Grapevine Relief and Community Exchange, or GRACE, a local nonprofit relief agency, to help relocate the residents of the mobile home park. GRACE planned to help transition the mobile home residents to new living accommodations within an approximately six-month period, according to meeting documents.

The trailers at Shady Oaks are inhabited by one or more low to very low-income families, according to a letter sent by GRACE CEO Shonda Schaefer. More than 82% of the families have at least one adult working full-time, while most hold multiple jobs.

"The average cost of rentals is significantly higher in Grapevine, and of the limited trailer parks, vacancies are almost non-existent," Schaefer wrote.

Council members voted against the rezoning after both the council and the Planning and Zoning Commission raised concerns about the traffic impact from the apartments. About 20 concerned citizens also came forward, most to voice their opposition to the project. They also cited traffic concerns and said that the project was too dense, as well.

The city secretary said the city received 32 letters in support of the project and seven against.

Since the project has been denied, Schaefer said the case manager has still been funded for six months. The case manager will continue to work with families on an individual basis for the remaining months as it relates to them staying in the mobile home park.

One of her concerns remains on the current state of the mobile home park and the spotlight that has been placed on its condition, she said. She said families there might have to shoulder some of the costs related to enhancing the properties, and if so GRACE would look to help them with that. In the meantime, she encouraged the City Council to assemble a task force to look into the affordable housing needs in the city.

"Low-cost housing has got to be on the agenda for the city council," Schaefer said. "We have got to start looking at options. This is a problem and it's going to continue to be a problem, and we're not the only ones facing it."