The cities of Grapevine, Colleyville and Southlake each adopted their general operating budgets and tax rates for fiscal year 2019-20 at their Sept. 17 meetings. FY 2019-20 begins Oct. 1.

Although the tax rate is a decrease, the tax revenue that the city collects will increase due to new property added to the tax roll and property value growth, according to meeting documents.

This is a 4% increase over the current fiscal year, according to previous reporting by Community Impact Newspaper. Most of the bump is due to a 3% pay raise for all employees; additional 2% merit-based pay raises for some employees; and budget step increases for police and fire personnel. The city is expecting the same amount in revenue as it is in expenses.

Colleyville adopted the effective property tax rate for the second consecutive year. The new tax rate will be $0.306807 per $100 valuation, a decrease of $0.013993 cents from the current rate.

“That’s something to be very proud of,” Assistant City Manager Mark Wood said at a budget presentation. “Basically, it means the city’s going to collect the same amount of property tax revenue for fiscal year [2019-20] that we did for fiscal year [2018-19], which is the current fiscal year, excluding new growth. It’s not easy to do—takes a lot of commitment.”

The tax rate will provide for a balanced budget and will yield in a surplus of about $400,000 in the general fund, Wood said.

The budget will help expand public safety services by hiring personnel and increasing the allocation for the fire department’s overtime pay, Wood said. The budget will also fund investments in infrastructure, beautification efforts and city employees.

Southlake officials adopted a property tax rate of $0.41 per $100 valuation, a $0.037 reduction from the current rate.

Officials said this is the biggest tax reduction since the 1980s. For those receiving Southlake’s 20% homestead exemption, the tax rate drops further to $0.328 per $100 valuation.

Because the new tax rate is lower than the effective tax rate, the city will collect about $199,000 less in property tax revenue, according to budget documents.

“We’re very excited about this budget,” Mayor Laura Hill said. “This is huge.”

Carroll ISD reported it has shelled out about $190,000 in COVID-19-related expenses since the start of the pandemic.

Effective May 4, OUCH Orthopedics has moved to a new Southlake location at 431 E. Hwy. 114, Southlake. 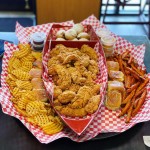