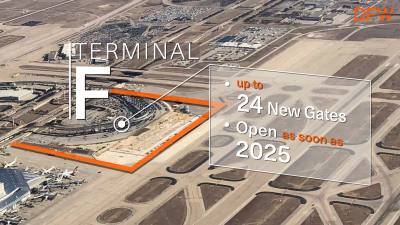 In addition to the construction of Terminal F, the airport has plans to redesign Terminal C to improve customers' experience, according to the news release. Total project costs are estimated to be about $3-$3.5 billion. It will likely be financed by bonds and repaid through airline rates and charges over the life of the bonds.

“DFW is American [Airlines'] largest hub and a central gateway to our extensive international and domestic network,” American Airline Chairman and CEO Doug Parker said in a statement. “The plans we’re announcing today will allow for the continued growth of DFW and ensure the airport remains a premier gateway for American for many more years to come.”

DFW Airport has served a record 69 million customers in 2018 and officials anticipate they will see more passengers and added services in the next two years than in the past 20 years, according to the news release. It also announced 28 new destinations in 2018, and it was also recently named the 2019 Airport of the Year by trade publication Air Transport World.

"The new Terminal F and the expansion that could follow will provide the region with the growth it needs to compete with international business centers,” DFW Airport CEO Sean Donohue said in the news release. “The airport is growing faster than ever, and it needs to keep pace with the Dallas-Fort Worth economy to provide jobs and connections for businesses and families.”

A 2015 economic impact study indicates the airport contributes more than $37 billion to the DFW economy, providing nearly 60,000 jobs in the airport and 228,000 across the region, according to the news release.
SHARE THIS STORY

Despite unique name, Southlake seafood restaurant Shuck Me is fishing- and family-centric

Chief operating partner Bill Curci said what sets Shuck Me apart from other seafood restaurants is its authenticity.

5 businesses that opened in Grapevine, Colleyville and Southlake in November

Read about five new local businesses that opened in November.

Southlake residents are invited to share their feedback on the city's proposed changes to the Mobility Master Plan.