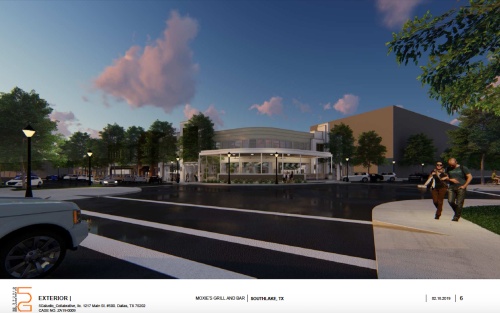 Southlake City Council approved the site plan for Moxie’s Grill & Bar during its March 19 meeting. The restaurant has locations in Dallas and Houston, serving cocktails and primarily American cuisine.

The restaurant would occupy the conjoined space of the HMK store and former Cafe Express on the northeast corner of Central Avenue and Main Street in Southlake Town Square, according to the meeting agenda packet.

The interior space will be remodeled to include the dining area, private dining space, an event room and a bar, according to the agenda packet. The exterior of the restaurant will also be redesigned with a painted stucco finish.

Guests will also be able to sit on the covered patio, according to the agenda packet. Moxie's also plans to offer valet services, which will require a separate permitting process. Documents indicate the restaurant may open in November.

The site plan was approved with a 6-0 vote. Council Member Randy Williamson was absent.

“This is going to be one of our most beautiful locations,” Moxie’s General Manager Drew Smith said. “We’re excited to put it in Southlake.”