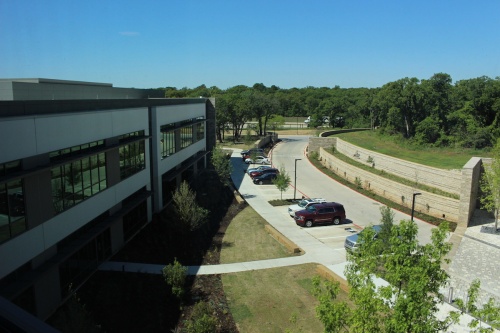 The view from the third floor of TD Ameritrade shows the stone architecture that surrounds the building.

On April 26, TD Ameritrade unveiled for the first time its new 300,000-square-foot Regional Financial Business Center to the community of Southlake.

TD Ameritrade CEO Tim Hockey said the company employs 10,000 associates, with 2,000 of those located in Southlake.

President of TD Ameritrade Institutional Tom Nally said he believed Southlake was a good place to bring the business from it's previous location in North Fort Worth. The campus gives the company room to expand, he said, while instilling "green thinking."

"We really try to have a light touch on the land itself, because sustainability is really important to our workforce," Nally said.

The facility includes meeting spaces, cubicles where the walls are made of whiteboard material to encourage taking notes, a game room, a workout facility, a cafeteria and lunchroom, and a full-service onsite coffee barista.

"We want people to come here and recognize that this is a great place to come work," he said.

Employees transitioned to the Southlake campus in December, but the ribbon cutting marks the fact that the business is now fully operational, Nally said.

"From that very first meeting when former mayor John Terrill and I met with [TD Ameritrade officials] ... we knew that this was something incredibly special for our city," Southlake Mayor Laura Hill said.

She said the project impressed city staff with the professionalism of its developers and that in came in under budget and on time.

"People in Southlake are very, very proud of this project, and the mayors in the surrounding areas are appropriately green with envy," she said.