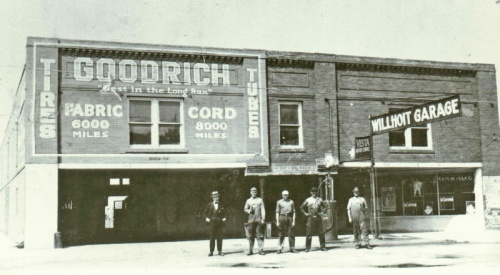 The original Willhoite Garage owners take a photo outside the garage in the 1920s.

In 1913 a department store and mercantile building was constructed on downtown Main Street in Grapevine. This same building has housed a theater, an automotive garage and a furniture warehouse, and is now home to Willhoite’s Restaurant.

After more than 100 years of existence, the building is getting a makeover because of its owners, Phil Parker and his son, Eric. The renovations to the building’s front entrance are nearly complete, restoring the restaurant’s facade to its original appearance in the 1920s.

“It’s just been a dream for us to put the front back to the way it used to be,” Eric said.

The building originally served as a department store and then was used for a time as a theater. In 1919 Andrew Wiley Willhoite took over the lease and brought to Grapevine the first full-service automotive station. The garage remained in operation until 1975 when Willhoite’s son, Ted, retired from the business, and then the building was used as a furniture warehouse until 1980.

Phil bought the building in 1980 after recognizing a need in Grapevine to have a restaurant that would stay open late and give people the chance to socialize after dark.

“We were encouraged by a lot of people to do something,” Phil said. “… That was kind of the purpose, was there was a big need for a place for people to gather, to sit down and have lunch, because [there] was just nothing. There were drive-ins, but there were no full restaurants.”

Phil said in the ’50s and ’60s a trend emerged to try to modernize the historic buildings.

“[Business owners] were told to modernize [their businesses’ appearances], and we put up all these aluminum sidings and fronts on all the buildings, and my dad was part of that,” Phil said. “And then of course, they finally realized it would be much better if they took it back to the past.”

He said the restaurant was one of the first businesses in Grapevine to pay tribute to the history of the building with its original wood floors and exposed brick walls, and of course, keeping the historic Willhoite name.

Willhoite’s Restaurant has made many changes since the ’80s, Phil said, when it shared the same space with a travel agency. Now the restaurant is more than 9,000 square feet and seats 265 people. He said the restaurant has been at capacity several times during its existence.

“During the festivals we are right there,” he said with a laugh.

The renovation gives the building a new skylight, roof improvements, fresh paint on the front and removes the plaster the building was covered with before to expose the historic brick underneath. New brick was used where old brick could not be salvaged.

The goal, he said, is to convey that the restaurant is one of the oldest in Grapevine and to give customers a glimpse into the past.