The eastbound lane from the Dallas North Tollway to US 75 in McKinney also recently opened. Rey said that NTTA will continue to open new lanes in segments as construction wraps up.
RELATED STORIES

• ‘Golf is our ocean’: PGA of America previews scenic headquarters in Frisco

The project aims to improve regional mobility, as the estimated North Texas population of 7.5 million is projected to exceed 11 million in the coming decades.

Brian Moen, Frisco’s assistant director of engineering services and transportation, said that the NTTA has worked well with the city as both entities attempt to proactively complete projects to adjust to the region’s growth.

He added that commuters on the Dallas North Tollway that switched to the SRT to get to arterial roads like Coit, Independence or Preston experienced a lot of congestion during rush hour.

“With some of the ramp changes that they've made as a part of the widening, that should help improve that situation, so that's one of the things that [drivers] should notice early on once everything's fully opened up,” Moen said.

The project is paid for through the NTTA’s Capital Improvement Fund, which consists of toll revenue available after operations and debt services have been paid.

As more employees began working from home, rush-hour congestion reduced significantly, Webb said. Some areas of the metroplex saw traffic drop by between 7% and 10% compared to pre-pandemic levels, he added.

As part of its long-term mobility plan for the region, the North Central Texas Council of Governments wants companies to consider designating at least one day per week to remote work.

“It can’t be mandated; it’s just a goal,” Webb said of the initiative. “The hope is [remote work] ... will allow us to continue to grow without the congestion experienced by other large metropolitan areas.” 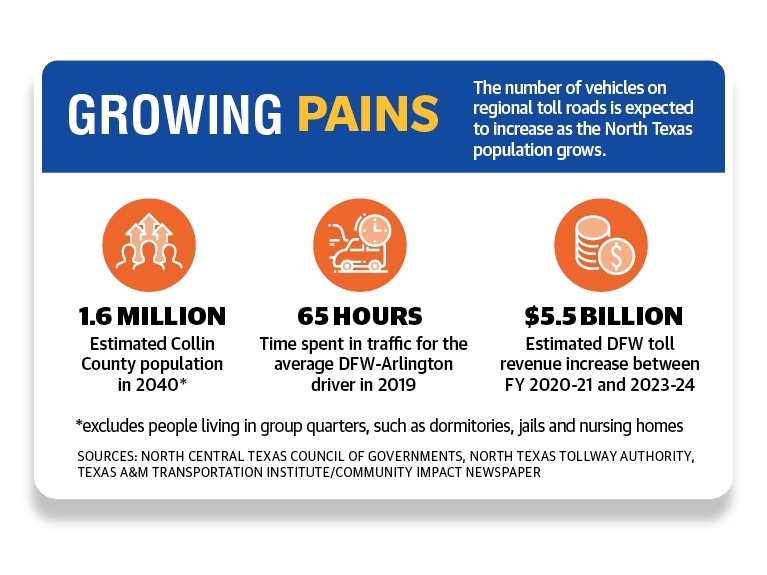 As part of a biennial toll rate schedule approved by its board of directors, NTTA announced earlier this year a $0.01 average toll rate increase, from $0.19 to $0.20 per mile, that began July 1.

One of NTTA’s upcoming projects includes widening the DNT to four lanes in each direction from the SRT to US 380. Design is ongoing for those improvements.

Moen said that the city has been working with the NTTA to ensure the expansion is able to accommodate the growth of northwest Frisco with the future arrival of the Fields development and the PGA courses.

“A lot of times, it's like that ‘Field of Dreams' movie: you build it and they will come,” Moen said. “Where we add capacity, usually there's demand that will come and use that... But I think long term, it'll serve Frisco [and] what its needs are.”

The city of Frisco’s transportation department is also assessing the needs of commuters to determine where potential improvements could be made, Moen said. Annually, his department reviews traffic data collected at various locations throughout the city to see how areas are changing and where the demand is. Right now, the focus is on north-south arterial roads that intersect with the SRT.

The transportation department has a Capital Improvement Program, which consists of a five-year thoroughfare plan based on development in the city. That plan is “constantly” updated, Moen said.

He gave the example of Coit Road, which is currently being widened to six lanes from Main Street to the SRT. Once that project is completed, it will be widened from Main to US 380.

Eventually, the city will do the same with Independence Parkway, he added.

“We're positioning ourselves to try and provide good flow that leads down into [the SRT] for those who need to use it to go elsewhere around the region,” Moen said.