Complexity Gaming debuts esports headquarters at The Star in Frisco 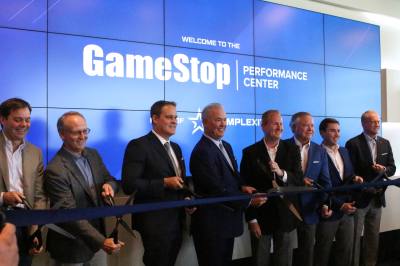 Complexity Gaming opened its headquarters at the GameStop Performance Center on May 20, 2019.

The Star in Frisco is now home to professional esports organization Complexity Gaming. The 11,000-square-foot headquarters opened at the GameStop Performance Center on May 20 for gamers of all levels.

“This is just a beautiful place, and I think what we envisioned, Mayor, when we came to Frisco,” Dallas Cowboys Executive Vice President Stephen Jones said to Mayor Jeff Cheney in his opening speech.

The center’s public area features a retail space, performance facilities for team members as well as recovery, wellness and mental health amenities. The private area provides resources for Complexity Gaming athletes and coaches, including advanced training rooms, a player lounge, an innovation lab and more, according to a news release.

The esports organization, which has multiple teams, is owned by Jerry Jones of the Dallas Cowboys and investor John Goff. Complexity Gaming is run by founder and CEO Jason Lake.

Its new home is located on the second floor of the building that faces Tostitos Plaza and the Ford Center at The Star.

Stephen Jones said the combination of Complexity Gaming and GameStop fulfilled his ultimate vision for The Star.

“The one thing we always dreamed about was to have a place where people work, where they live and where they play,” Jones said in his speech.

GameStop CEO George Sherman said the new center is “at the heart” of where GameStop needs to be.

“We’re thrilled to be a part of this facility in Frisco,” Sherman said. “We knew that this association would result in something that was absolutely top shelf, and of course it is."
SHARE THIS STORY

Rice said those who participate in the curriculum set at Write On! can get practice on many skills: writing short stories, poetry, essays and more.

The new agreement caps the main performance hall to 1,500 seats.

T-Rex Crush says the services offered can compact waste significantly from its original density and guarantees a minimum of 20% in savings.

The swimming academy offers lessons for children as young as three months old.