For the 16th time in 20 years, Frisco ISD is preparing to shift school attendance zones for the upcoming academic year—this time, in anticipation of opening Emerson High School.

District staff presented plans at the Nov. 9 school board meeting for the 2021-22 school year to accommodate the 11th high school, which is under construction in the easternmost portion of the district that crosses into the city of McKinney.

Frisco ISD, which is one of the fastest growing school districts in the country, is responsible for educating over 63,000 students, per the district website. That is more than 23 times higher than in 1995, when only 2,692 students were enrolled, according to data from the Texas Education Agency.

To keep up with surging enrollment, the district is planning to open Emerson in the fall and another high school in 2022. 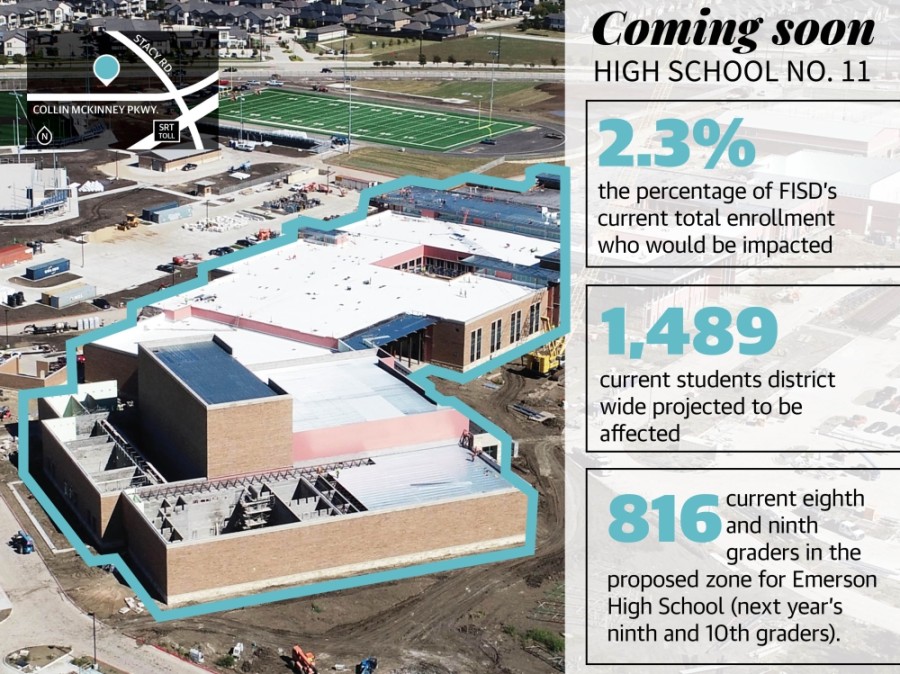 Scott Warstler, executive director of operations for the district, said redistricting’s greatest challenges revolve not around projecting the demographics or redrawing the attendance boundary lines, but rather around assuring families that their students will continue to receive a quality education.

“We do understand we’re impacting kids and families, and it’s really hard to convey that, sometimes, to parents—that we’re trying to keep their best interests in mind,” Warstler said. “But ultimately, when schools are overcrowded, we have to move kids. Our job is to look at it from the district ... level and make sure we’re doing what’s best for the entirety of the district.”

The Frisco ISD decision to frequently shift school attendance zones within the district is intentional, Warstler said; it is all part of a greater strategy to keep schools small.

Cone said the district’s model is aligned with what the community has indicated it wants. Three years ago, 4,100 people—90% of whom were parents or employees in the district—took a survey to gauge the popularity of the small-school model. Results showed that nearly 80% of participants favored smaller high schools.

Frisco ISD has opened a new school almost every year since 1995 to accommodate rapid growth while keeping its high schools small, Cone said.

Each fall, the school board reviews attendance zones to determine whether changes are necessary for the upcoming school year.

Families who reside in the neighborhoods that are tentatively slated to change schools next school year received an email from the district Nov. 10. Frisco ISD residents had an opportunity to comment on the upcoming attendance boundary changes during a special school board meeting Dec. 1, which took place after this publication’s press time.

The board voted Dec. 14 on the school attendance zones.

The rezoning plans at the high school level primarily affect Frisco ISD students who reside east of Custer Road. Students in ninth and 10th grades who live east of Custer would attend Emerson High School when it opens in August, staff said.

The proposed adjustments to attendance zones would also affect some students at Centennial High School and Heritage High School, which are about to exceed FISD’s high school capacity and risk surpassing the University Interscholastic League enrollment cutoff for 5A schools; Liscano Elementary and Nichols Elementary, which exceeded FISD capacity last school year; and some students at Hosp and Norris elementary schools. There are no proposals to rezone middle schools this year.

While the district adjusts zoning every time a new school opens, it takes about two years to plan for rezoning, according to Warstler and Todd Fouche, Deputy Superintendent for Business and Operations, who also works on FISD rezoning. 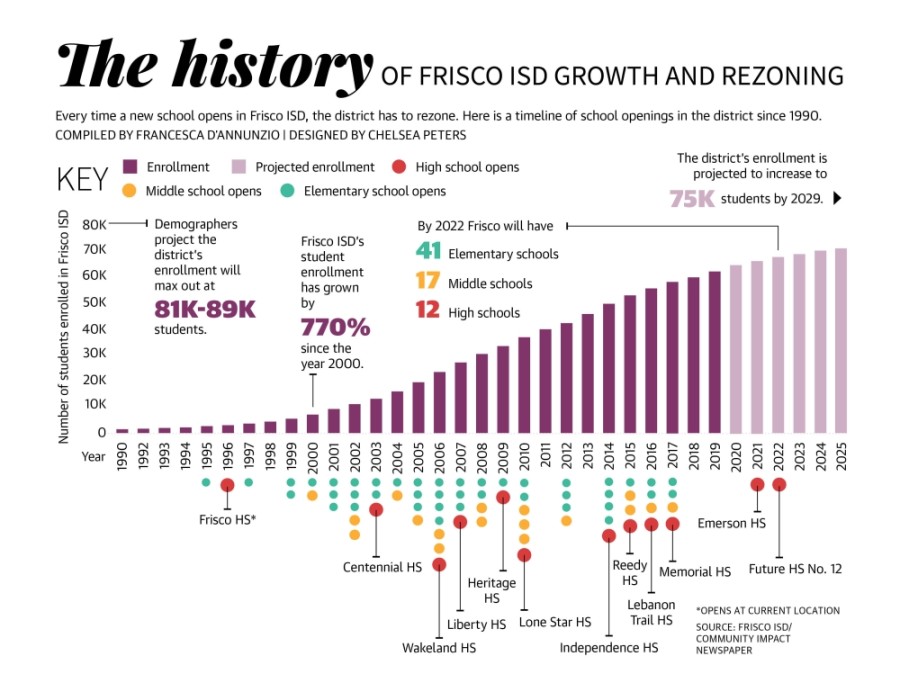 Fouche and Warstler said that they began drafting plans in April 2019 for the fall 2021 Emerson High School rezoning. Part of that process is projecting future enrollment based on property developing around Frisco.

“When we know how a developer is going to develop a piece of land, that’s when it kind of puts things in motion for us,” Fouche said.

However, sometimes the district’s actual enrollment in some neighborhoods does not line up with past predictions. At that point, staff has to redraw boundary lines multiple times before plans can be presented to the board of trustees. So far, the district has changed this year’s rezoning plans eight to 10 times.

This is normal, Fouche said, adding that population density is not the only reason to alter proposed plans for attendance zones. Community feedback is important, too.

Fouche said that the district listens closely to public input. He recounted a time when members of two Frisco neighborhoods made a case for not splitting up their subdivisions to attend separate elementary schools.

“Honestly, the numbers work much better when they’re at two different schools. But the community really felt like they were one ... community and they shouldn’t be separated, and they made a good case for it, and so we kept them all at one school together,” Fouche said.

Tony Felker, president of the Frisco Chamber of Commerce, said that in this turbulent time, the opening of two more Frisco ISD high schools in the next two years signifies economic growth.

“It’s actually a sign that things are normal again,” Felker said. “Opening a school during this time is a perfect reminder ... [that Frisco is] the best city to be doing business in.”

Felker said the school openings demonstrate that the city is staying on track with the identity local leaders have worked to build and maintain: Frisco is a place to live and work, not a “bedroom community.”

“The No. 1 driver for people moving to Frisco and for companies moving here is the quality of life, and in particular, the quality of education that FISD is providing,” Felker said.

Frisco ISD officials acknowledged the challenges students may face when they are rezoned from one school to another. But after nearly two decades’ experience with shifting attendance boundaries, incoming Emerson High School Principal Kristen Sommers said, the district has created a system to get students excited about the new campus.

“We know that ... this is a challenge that [students] have either faced probably while they’ve been a student in Frisco already or they’re going to [face], probably, at some point in time,” Sommers said. “But ... those students get to have a say in ... what’s going to become the legacy of this campus.”

Sommers said short of picking school colors—which need to be done in the construction period, well before the building opens—incoming students will play a role in establishing each aspect of the school’s identity, including everything from instructional preferences to the school mascot.

High School No. 12, which has yet to be named and is under construction near the future PGA of America headquarters, is set to open in fall 2022 as originally scheduled. As such, a year from now the community will likely have the same conversations again that it is having currently, said Cone, the assistant communications director.

Although moving schools can be difficult for students, Warstler said he feels confident this is the best move for the district as a whole.

“Regardless of which school you end up at, you’re going to receive a top-notch education, and you’re going to be surrounded by staff and students who care about you individually,” he said.