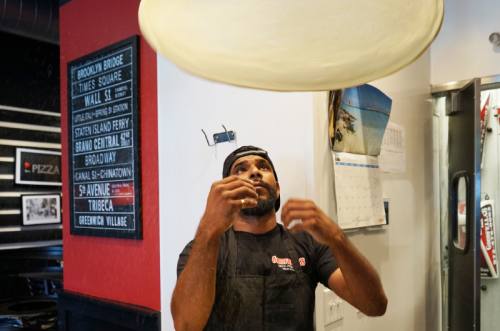 Matt Samuel started out in the restaurant business in 2000. After learning a thing or two about operating a restaurant, he decided to open a pizza place.

“Pizza is a fun food,” Samuel said. “Pizza is a kind of food that all people like.”

Samuel originally started Goodfella’s in Carrollton, but in October 2018, he brought the eatery to Frisco.

The original Goodfella’s opened in New York City in 1992, according to the restaurant’s website.

Samuel said what makes his pizza world-famous is the fact that the dough is made fresh three times a day, the mozzarella is homemade and all the ingredients are fresh.

The pizza dough is hand-spun. Samuel said it is a difficult skill, and the cooks that work there have been doing it for 25 years or more.

“[Hand-tossing] is part of showing love and care to the pizza,” Samuel said. Goodfella’s also offers a customizable catering menu for family or corporate events.

Samuel said there is another quality that is not on the pizza that makes it so tasty.

“Customer service is huge for us,” Samuel said. “We want to make sure that [customers] are treated as best they can.”

“It’s not just about selling [food],” Samuel said. “We like to help others as well and give back to the neighborhood.”

Samuel also spoke about the personal relationships Goodfella’s has made with members of the community.

He mentioned one customer who came in every Friday who had been absent for more than two weeks. When Samuel called him, the customer shared he had suffered a heart attack, so Samuel sent him a pizza on the house.

“We’re here for business,” Samuel said. “But more than that, it’s about helping other people and [developing] relationships.”