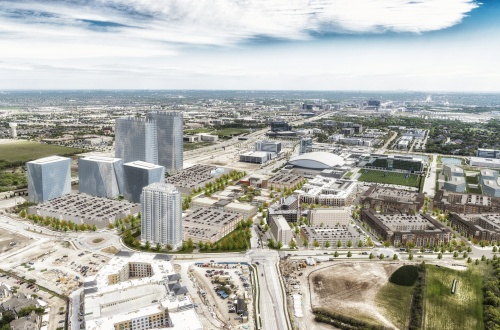 Frisco Station is a 242-acre mixed use development north of The Star in Frisco.

Frisco Station developers announced a partnership with AT&T to incorporate 5G Evolution technology into the infrastructure of the 242-acre mixed-use development.

This would allow smartphone users within the development to have stronger signal strength and free public Wi-Fi inside or outside of buildings, said Robert Folzenlogen, Hillwood Properties senior vice president.

Frisco Station is being master planned to have AT&T's fiber technology built into the ground, Folzenlogan said. This plus some above-ground technology will allow users to access 5G and Wi-Fi capabilities anywhere within the development.

Folzenlogen also said many people who don't have AT&T as a phone carrier will still be able to use the 5G technology within Frisco Station.

"We're early adopters and really a testbed for this technology, which ultimately will be rolled out and will become more commonplace within other communities," he said.