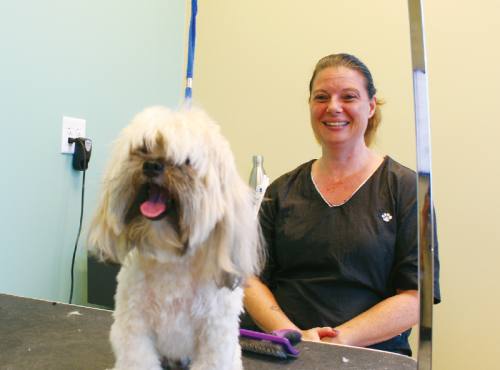 Dr. Craig Buffington said Frisco’s population was at about 8,000 people when he arrived in 1997. Four years out of veterinary school, Buffington came to Frisco to serve as associate veterinarian for a newly built clinic, then-named Stonebrook Veterinary Clinic and Grooming.

“You didn’t really see a whole lot, but it was an opportunity for me to maybe nail down a clinic,” Buffington said. “... Little did we know, we were moving into the fastest-growing city in the nation.”

The opportunity became a reality this year when Buffington opened a relocated and renamed Stonebrook Family Pet Clinic on April 29 on Preston Road. The clinic offers wellness and diagnostic care, surgical services, dentistry, boarding and grooming.

However, Buffington said getting the clinic to its new location was “a bit of a journey.”

Buffington took over ownership of the clinic in 2000. About seven years later, he started looking at properties to develop what would become Stonebrook Family Pet Clinic.

However, Buffington had to overcome hurdles to open the new location. The recession and legal issues over the property’s plat line stalled development until 2014. The clinic moved to a temporary location near the development in 2017 when the new clinic finally broke ground.

The finished product is a 6,000-square-foot facility with three canine and two feline exam rooms, a surgical and dental suite, and an outdoor area with 2,000 square feet of antimicrobial canine turf. The clinic also has a feline boarding room with an exercise area and interactive video floor. Two canine wards have 20 cages, four kennel runs and 11 luxury suites.

Up until the clinic’s opening, Buffington said he attended three veterinary design conferences. This resulted in intentional touches, such as light blue, yellow and gray wall colors to calm cats and dogs. There are separate waiting areas between cats and dogs to help quell cats’ anxiety.

Buffington said other design elements, such as animal art, functional furniture and lamps on nightstands, work to make the clinic feel like home for owners. He said this choice harkens back to the clinic’s mission of treating each patient like a family member.

“You’re going to be a part of our family when you come in here, and we’re going to treat you that way,” Buffington said.